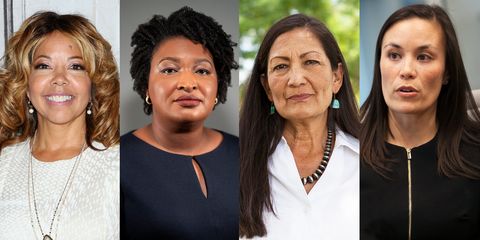 On Friday afternoon, Hillary Clinton informally endorsed four trailblazing Democratic women in their midterm races, writing on Twitter: "We'd all be lucky to see these four extraordinary candidates win their races for Congress this fall." Among her endorsees were Stacey Abrams, the progressive and popular Democratic nominee for governor in Georgia, and Deb Haaland, tipped to be the first-ever Native American woman in Congress.

"With a historic number of women running this year, we have a tremendous opportunity to make our government better reflect our country," Clinton wrote on Twitter. The former presidential candidate and Secretary of State has also focused on Onward Together after her 2016 loss, a nonprofit which funds and gives other kind of aid to progressive grassroots organizations within politics.

Here's who would have Clinton's vote (you know, if she lived there):

"LucyWins2018 is a businesswoman and activist running for Congress in the 6th district of Georgia," Clinton noted on Twitter. "After her son, Jordan Davis, was shot and killed, Lucy turned her grief into action by fighting for both gun safety and criminal justice reform."

You may recall the 2o12 Jacksonville shooting of Jordan Davis, who was shot dead at a gas station by a white man who said Davis had been playing music too loudly. (He was later sentenced to life in prison without parole.) After Davis died, McBath became an advocate for commonsense gun reform, and eventually joined Hillary Clinton on the campaign trail. After the Florida shooting this past February, McBath formally announced her intention to run.

I know the tidbit about romance novels caught your attention, so let me elaborate—under the pen name Selena Montgomery, Abrams published nine romance novels. But that has little to do with her run for governor, which is tipped to be one of the most exciting races of November.

With a historic number of women running this year, we have a tremendous opportunity to make our government better reflect our country. We'd all be lucky to see these four extraordinary candidates win their races for Congress this fall:

Former VP Joe Biden has also thrown his support behind Abrams, and is even hitting the campaign trail with her next week.

Clinton endorsed Ortiz Jones with the note: "@GinaOrtizJones is a veteran of the Iraq war, intelligence officer, and candidate for Congress in the 23rd district of Texas. She wants to create good-paying jobs and expand health care options for all Texans." A first-generation American, Ortiz Jones would be the first Filipina American in Congress if elected.

Ortiz Jones spent three years in the U.S. Air Force, operating under the now-defunct policy of "Don't Ask, Don't Tell"—she came out as gay as a teenager. She also worked under Trump in the U.S. Trade Representative's office as a director, finally quitting in protest and announcing her intention to run for office.

A single mom who would be the first Native American woman in Congress, Deb Haaland spoke with MarieClaire.com last month about the myriad reasons she decided to run. "I want other Native women to see they can do it, too," she shared. Haaland has a storied history in New Mexico state politics, having run for lieutenant governor in 2014 and served as chairwoman of New Mexico's Democratic party for two years.

"If I can inspire young women like that to finish their schooling, get some experience, and then eventually think, I can run for office, I’m happy about that," she explained to MarieClaire.com.

Related Stories
How Samantha Bee Is Trying to Gamify the Midterms
The Beginner's Guide to the Midterm Elections
Jenny Hollander Director of Content Strategy Jenny is Marie Claire’s Director of Content Strategy, editing and writing about everything from politics to reality television to accessories and celebrity news.
This content is created and maintained by a third party, and imported onto this page to help users provide their email addresses. You may be able to find more information about this and similar content at piano.io
Advertisement - Continue Reading Below
More From The 2018 Midterm Elections
One Week Post-Midterms Here's What We Know
How Ilhan Omar's Speech Started Is Important
Advertisement - Continue Reading Below
You Should Get a Dog! A Retired Greyhound!
What the Election Results Mean for Abortion
Women Won Big on Tuesday. Now Let's Get to Work
Deb Haaland Will Rep Indigenous People Nationwide
The Greatest Feminist Wins of the Midterms
Gretchen Whitmer Is Ready for the Top Job
Every Celebrity Who Voted in the 2018 Midterms
30 Celebrities Who Have Endorsed Politicians