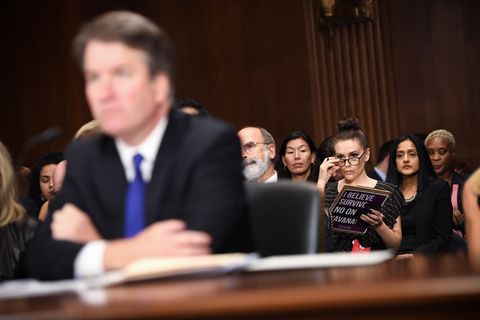 You weren't at Brett Kavanaugh's Senate Judiciary Committee hearing yesterday, but you better believe Alyssa Milano was a decent stand-in. The actress and activist spent the day shooting daggers at the Supreme Court nominee, trying to film proceedings until a guard literally ordered her to stop, and holding up a booklet reading, "I BELIEVE SURVIVORS." One photo in particular began making the rounds on social media Thursday night, largely thanks to Entertainment Tonight staffer Meredith Kile's comment on Twitter: "I've never wished so hard that Alyssa Milano was a real witch."

Milano, like her fellow #MeToo leader Rose McGowan, famously spent eight years playing a witch in runaway hit Charmed. (And she's not super happy about how the CW's reboot is going, if you were wondering.) A lifelong activist, Milano became one of the faces of the #MeToo movement when she reignited Tamara Burke's decade-old hashtag in light of the accusations against Harvey Weinstein in 2017. She's amped up her political activism in the 18 months since Trump was elected, coming out against Steve Bannon and many of Trump's policies and lending a hand in local Democratic races.

Last week, Milano went public with her experiences of sexual assault in a Vox essay, writing:

Let me be as clear as possible: I believe Christine Blasey Ford, and I demand that our senators vote to reject Brett Kavanaugh as the next justice on the Supreme Court. Every person who refuses to loudly and openly reject Brett Kavanaugh’s nomination is telling every generation of Americans that an alleged abuser’s career is more valuable than a survivor’s humanity. And the highest court in our land is no place for an alleged sexual offender to sit.

On Thursday, Milano attended the hearing as a guest of Sen. Dianne Feinstein, and openly glared at Kavanaugh throughout his testimony.

I've never wished so hard that Alyssa Milano was a real witch. pic.twitter.com/Oqaw7210eq

Meredith Kile's observation is spot-on: Milano does look as though she's trying to will Kavanaugh out of the Supreme Court, either by sheer force of mind or...witchcraft. For anyone who grew up watching Milano cast spells and team up with her sisters to defeat evil forces, the latter feels more fitting.

The Senate Judiciary Committee could hold a vote to clear Kavanaugh's nomination, setting the stage for a showdown Senate vote, as early as today.

Related Story
9 Powerful Quotes from Dr. Ford's Hearing
Jenny Hollander Director of Content Strategy Jenny is Marie Claire’s Director of Content Strategy, editing and writing about everything from politics to reality television to accessories and celebrity news.
This content is created and maintained by a third party, and imported onto this page to help users provide their email addresses. You may be able to find more information about this and similar content at piano.io
Advertisement - Continue Reading Below
More From Politics
Could This Be the Last Year of Roe v. Wade?
Meet the Next Presidential Pets, Major and Champ
Advertisement - Continue Reading Below
Who Is Jen Psaki, Biden's Press Secretary?
Bernie Sanders at the Inauguration Is a Whole Mood
The Inaugural Concert Was a Cheesy Balm
Read VP Kamala Harris's Inauguration Speech
No, There Is No Inaugural Ball This Year
Kamala Harris Is "Momala" to Two Stepchildren
Read Amanda Gorman's Moving Inauguration Poem
America's New Obsession: Amanda Gorman