Remember when Chelsea Clinton and Ivanka Trump were good friends, so much so that they declared to the world they'd remain close no matter the outcome of a certain 2016 election? Well, it looks like things didn't quite turn out that way. Who could have foreseen it!

Clinton appeared on Watch What Happens Live with Andy Cohen Thursday, and made her feelings pretty clear when asked where she and Trump stood. "I've not spoken to her since 2016 and I have no interest in being friends with someone who is not only complicit but actively taking part in this administration's everyday collision of cruelty and incompetence," she said, as Entertainment Tonight reports. "That's the answer."

"We were in touch at the beginning of the campaign," Clinton continued. "But it's just really hard when there's someone who's actively embracing their candidate—whether it's their father or not—who is trafficking in racism and sexism and antisemitism and Islamophobia and homophobia and transphobia and conspiracy theories and lies and is so fundamentally corrupt."

"I don't think [Ivanka and her father] are the same by any standard, but I think she's more than complicit, as anyone who has worked for him for so long by definition is," Clinton continued. "And I don't want to be friends with someone like that."

Oh, and Clinton's take on Tuesday's debate between Donald Trump and Joe Biden? "Donald Trump is still a racist, incompetent, miserable ghoul of a human being." 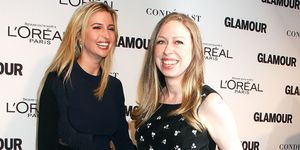 Yes, Chelsea Clinton and Ivanka Trump Are Friends
Emily Dixon Emily Dixon is a British journalist who’s contributed to CNN, Teen Vogue, Time, Glamour, The Guardian, Wonderland, The Big Roundtable, Bust, and more, on everything from mental health to fashion to political activism to feminist zine collectives.
This content is created and maintained by a third party, and imported onto this page to help users provide their email addresses. You may be able to find more information about this and similar content at piano.io
Advertisement - Continue Reading Below
More From Politics
Your Guide to the 2020 Presidential Debates
All About Ruth Bader Ginsburg's Posthumous Book
Advertisement - Continue Reading Below
A Guide to Celebrity Presidential Endorsements
Who Is Moderating the Third Presidential Debate?
All of Joe Biden's Homes
What's at Stake for Police Reform in November
Marie Claire's Guide to the 2020 Election
Joe Biden's Town Hall Was a Whole New Level of Zen
Savannah Guthrie Went Head-to-Head With Trump
What's at Stake for Healthcare in November