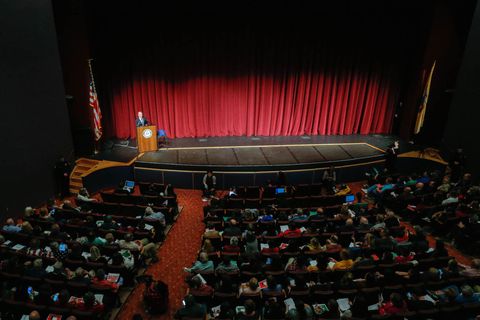 Democracy is alive and well, as Rep. Leonard Lance (R-NJ) learned last night. He held a town hall at a high school in his district, where hundreds of constituents filled an auditorium and protested on the sidewalks outside. The crowd did not bring their indoor voices.

Update: This post has been updated to remove information about Rep. Lance's previous town hall in February 2017, a photo of which still appears above.

Kaitlin Menza Kaitlin Menza is a freelance features writer.
This content is created and maintained by a third party, and imported onto this page to help users provide their email addresses. You may be able to find more information about this and similar content at piano.io
Advertisement - Continue Reading Below
More From Politics
In Conversation With Secretary Granholm
Laphonza Butler on What's Next for EMILY's List
Advertisement - Continue Reading Below
Anita Hill Believes We Can End Gender Violence
For Teachers, Going to Work Can Mean Life or Death
Want to Help Moms? Prioritize Menstrual Equity
Abortion Rights Start at the State Level
All of Your Abortion Questions Answered
The Texas Abortion Snitch Site Is Having a Bad Day
The Future of Afghan Women Depends on Us
How You Can Help People in Afghanistan