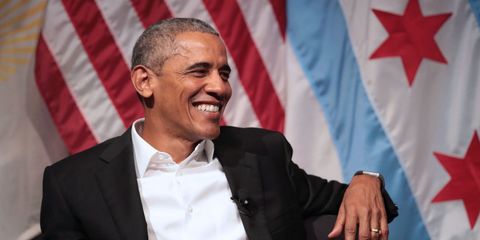 President Obama decided to surprise students at McKinley Technology High on Friday, by dropping in unexpectedly. To make the surprise even better, Obama casually walked in and asked the class, "How's everybody doing? Is that my seat? You don't mind me crashing, right?" Needless to say, nobody minded.

@BarackObama made a surprise visit to McKinley Tech HS here in DC to welcome back students as they start a new school year. pic.twitter.com/Y64tAE0KBl

According to The Hill, Obama spokesman Keith Schiller revealed that the former president was at McKinley to talk to students about "their life goals, pursuing higher education and giving back to their communities." More importantly, Obama is apparently "focused on supporting the next generation of leaders. Today's meeting is part of that ongoing conversation with young people."

Even though he's not in office anymore, Obama is intent on ensuring America's young people are educated, informed, and inspired. Obama also shared news of the visit on his own social media accounts:

Proud of these McKinley Tech students—inspiring young minds that make me hopeful about our future. pic.twitter.com/nqYC1mjjTB

These young people that I met at McKinley Tech today are the reason I'm hopeful about the future. To all the young people headed back to school around the country: Make us proud. You're the next generation of leaders, and we need you.

In the video posted to Instagram, Obama tells the group of students, "One of the things that I did throughout my presidency was I'd meet with groups of young people everywhere I went. Whether it was here in the United States, or when I was traveling overseas, just to kind of hear from them, find out what they're interested in. Because I do believe that most of the problems that we have are going to be solved by you."

Obama's faith in young people is inspiring, and it's a reminder that despite not being the president anymore, he'll never stop advocating for America.

Amy Mackelden Weekend Editor Amy Mackelden is the Weekend Editor at HarpersBAZAAR.com, where she writes about entertainment, celebrity news, beauty, and fashion.
Advertisement - Continue Reading Below
More From Politics
How a Parkland Mom Turned Her Grief into Action
He Voted for Trump. She Voted for Bernie.
Advertisement - Continue Reading Below
How Guerrilla Feminists Are Fighting Femicide
Who Was Mayor Pete's Father, Joseph Buttigieg?
Everything We Know About Senator Warren's Husband
Mayor Pete's Husband Would Be a "First Gentleman"
Nancy Pelosi, Icon, Ripped Up Trump's SOTU Address
Thoughts From a First-Time Caucus-Goer
And Now, a Word From the Future Voters of Iowa
Ayanna Pressley Wants Total Justice for Survivors