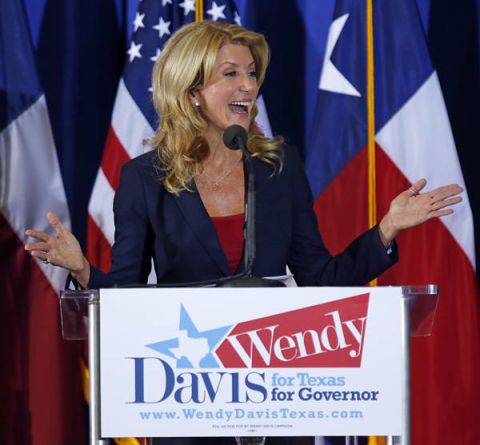 The state senator, who was presumed to win the Democratic primary, defeated fellow candidate Ray Madrigal. She will face Texas Attorney General Greg Abbott (R) in the fall.

Davis catapulted into the national spotlight last year after she filibustered a Texas abortion bill, that eventually passed, for 11 hours. When enacted in November 2013, the law criminalized abortions after 20 weeks and placed harsh restrictions on facilities, which reportedly resulted in one-third of the state's abortion clinics shutting their doors. In February, Texas suspended its first doctor under the new law for performing abortions without getting admitting privileges to local hospitals.

Since Davis entered the race for Texas governor, critics have paid close attention to details of her personal story, which the candidate had placed at the center of her campaign. Davis had her first child when she was a teenager, lived in a trailer, eventually graduated from Harvard Law School, and went on to serve in the state Senate. Her story is quite remarkable but critics have accused her of omitting certain details, particularly those pretaining to the role she played in raising her two daughters. Supporters have labeled those attacks as part of a larger smear campaign, and have criticized some media outlets for their coverage of her candidacy (a recent New York Times Magazine cover featured a headline that read, "Can Wendy Davis Have It All?")

The cover sparked outrage for what critics considered a serious double standard—would such a headline appear on the cover of a magazine for a male candidate? As the Texas gubernatorial race heats up, debates over details of Davis's personal story are likely to play an even bigger role. We just hope Davis is evaluated more on her fitness to lead.