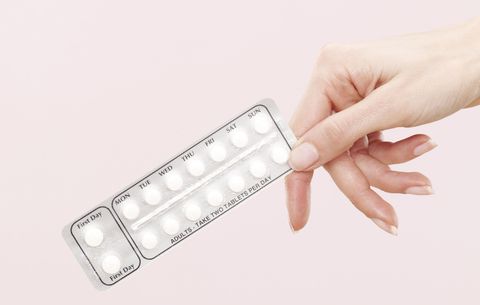 Thanks to breakthroughs in science, there are more birth control types than ever to choose from, so it's always a good idea to study up on all the pros and side effects of each to make a game plan with your doctor. Below, read our primer on the best birth control Pills for your needs, from options for clearer skin to ones that allow you to get your period just once a year 🙌. Plus, check out our guide on what to expect once you decide it's time to stop using the Pill for good.

WHAT THEY ARE: Lybrel is the first FDA-approved no-period Pill to give you the same amount of synthetic estrogen and progestin every day so there's no monthly "withdrawal bleed" (the period you get with regular Pills). Currently, it's discontinued by the manufacturer, but is still sold in its generic form, Amethyst.

The once-a-year-period Pills are ideal for women who experience cramping, heavy bleeding, or pain with their periods and/or for those who just think they're a drag.

If you're already taking monophasic Pills (which are all the same except for during your period week), you can build a do-it-yourself Lybrel by just skipping the placebos. One caveat: Insurance usually won't cover the Pills, since it only funds one pack per month.

THE DOWNSIDE: Breakthrough bleeding. When you're on other Pills, the lining of the uterus remains thin (that's why Pill Periods are so light). On continuous hormones, the lining is even thinner and can become unstable and shed at random. Give it time: One study in the journal Contraception showed that 93.9 percent of women experienced bleeding in their first Pill pack, but by pack 13, that percentage had dropped to 21. "If you are flipped out by being surprised, don't use this Pill," says Yale University OB/GYN Dr. Mary Jane Minkin. Also, many women feel nauseated during the first few packs of these.

Without a period, will you know if you're one of the 1 to 2 percent of women who get knocked up even with perfect use? Not unless you stay alert to other symptoms of pregnancy.

IS IT BAD FOR YOU? These Pills are still controversial, despite their FDA approval. Most doctors believe there's no scientific reason you need to have a period every month. The Pill was designed to give you one so it would gain approval from the public and from religious leaders — and to reassure women that they weren't pregnant. (When the Pill came on the market 48 years ago, there were no at-home pregnancy tests.) Detractors are concerned that the two big studies published so far followed women for only one year and that there's still a possibility that the lining could build up and raise the risk of endometrial cancer. But Minkin notes that doctors have been prescribing constant-use birth-control pills "off label" for decades, with no known ill effects.

WHAT THEY ARE: Yaz is the only oral contraceptive allowed to state on the label that it's approved for the prevention of premenstrual mood disturbances such as irritability, moodiness, bloating, fatigue, headaches, and muscle aches. (It's the only one that has submitted the required studies to the FDA.) Many doctors think other oral contraceptives may also help with severe PMS (called PMDD), since they prevent hormonal swings.

THE DOWNSIDE: The Pill doesn't counter PMS in everyone, and for some, PMS may get worse, says Minkin.

WHAT THEY ARE: Yaz and Yasmin use a new kind of progestin called drospirenone. (Actually, it's a diuretic that acts as a progestin.) It eliminates sodium from your tissues, preventing the water retention that many women swear comes with other Pills. While it may prevent bloating, "it's not a weight-loss pill," says Northwestern University OB/GYN Dr. Lee Shulman. The difference between Yaz and Yasmin: Yaz contains fewer placebos (see "Pills for Shorter Periods," next page) and slightly less estrogen.

THE DOWNSIDE: Drospirenone helps your body hold on to potassium, which is usually a good thing. But if you're a heavy user of anti-inflammatories such as ibuprofen (Motrin, Advil) or naproxen (Aleve, Naprosyn) or if you have kidney, liver, or adrenal disease, extra potassium could cause serious heart and health problems.

WHAT THEY ARE: All contraceptives that contain both estrogen and progestin increase the amount of a molecule called sex-hormone-binding globulin, which acts like a sponge that mops up free testosterone. Less testosterone means less acne. Currently, only brands like Yaz, Estrostep, and Ortho Tri-Cyclen have received FDA approval for acne claims (because they're the only ones that have submitted the clinical studies needed for FDA approval). But it's likely other combination Pills will reduce it, too

THE DOWNSIDE: It's theoretically possible that lower levels of free testosterone may result in lower libido. But so far studies fail to prove it. And many women feel a greater sex drive on any Pill since they're no longer worried about getting pregnant.

WHAT THEY ARE: All Pill packs used to contain 21 "active" Pills and seven placebos. Now, some—like Yaz and Loestrin 24 Fe—offer 24 days of hormones and four of placebos. That may mean shorter, lighter periods.These Pills may be more effective at preventing pregnancy for women who forget to take theirs on time. "With seven days of placebo, a certain percentage of women will start to get some development of follicles [which means a higher likelihood of producing an egg]," says Dr. Paula Hillard, OB/GYN professor at Stanford University. But having only four hormone-free days prevents that.These pills may also lower your risk of headaches and PMDD. Many women feel their worst—with bloating, headaches, and breast tenderness—during the hormone-free segment of the Pill pack. By being on hormones longer, you may suppress these symptoms.

THE DOWNSIDE: Yaz may cause high potassium levels, which aren't healthy for your heart (see "No-Bloat Pills").

WHAT THEY ARE: They're not new, but women don't always know about Pills (including Ortho Micronor, Ovrette, and Errin) that contain no estrogen, only progestin. Unlike combination estrogen-progestin pills, they don't suppress ovulation—these just thicken the cervical mucus so it's difficult for sperm to unite with an egg. They can cause breakthrough bleeding, especially if they're not taken at the same time each day.

These Pills, often called "mini pills," are best for nursing moms (estrogen impairs milk flow) and for people who shouldn't take estrogen, such as those with high blood pressure, a risk of blood clots and strokes, or extreme migraines, or those over age 35 who smoke or are obese. The progestin-onlys also help lower LDL (bad) cholesterol and triglycerides. (The trade-off is that they lower "good" HDL too.)

THE DOWNSIDE: These may worsen acne, and they're less reliable at preventing pregnancy than combination Pills.