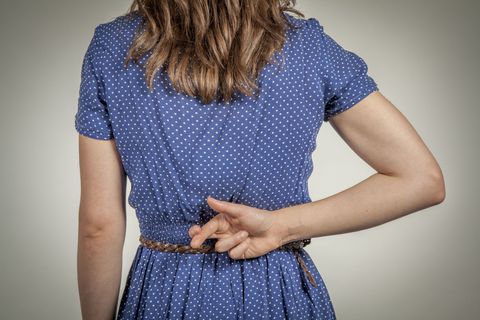 Most people can agree that lying is an absolute no-no when it comes to relationships. At worst, getting caught in a lie will win you a one-way ticket out the door and a permanent spot on the sh*t-talking list. At best, it causes tension. No matter how you spin it, lying usually ends badly. But new research proposes that lying can actually be an important factor in keeping your relationship strong. (Yeah, I know...)

According to a study published in the biological research journal, Proceedings of the Royal Society B, there are apparently some lies that can bring you closer with your friends or partner.

In other words, lying about how much you like his new shirt is pro-social; lying about suspicious texts is anti-social.

While in general, society views lying as bad, most people would agree that fibbing is acceptable in certain situations. Using a mathematical model, the study proved this overarching theory to be more than correct. The research concluded that a balance between honesty and fibbing is crucial to maintaining a harmonious environment. Yep, honesty is *not* always the best policy. Knowing when to fib and when to come clean not only preserves—but strengthens—connections.

So next time he asks if you love that '90s metal band poster, you can feel less guilty when you respond, "of course, sweetie."