Today's Top Stories
1
Marie Claire Wants You to Vote
2
WORTH IT: Vitruvi Stone Diffuser
3
The All-Time Best Online Thrift Stores
4
Katie Holmes' Stylist Revolutionized My Wardrobe
5
How to Give Yourself a Great At-Home Manicure
Instagram

Okay, we know you’ve already been inundated with too many brow trends this year, from the squiggly wave brow, to barbed wire brows, to dragon brows, and you’ve been a really excellent trooper through it all. But the year is not over, and the hellish onslaught of sexual assault-riddled news is most likely just beginning, which means this new brow look couldn't have come at a better time. Meet spiked brows, an Instagram gem that so clearly displays our inner feelings right now of being a woman in modern society, it's almost laughable.

The look, which was created by 20-year-old makeup artist Amy Huisman from the Netherlands, is essentially just a bunch of spikes individually glued around her brows with lash glue. And no, we're not saying this is a wearable trend for everyday life, and we’re also not pretending that it’s a trend that’s currently blowing up on the internet, and that you must try it, and blah, blah, blah. No. 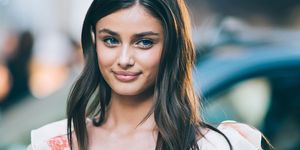 How to Grow Your Eyebrows 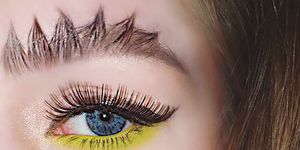 But it is, however, a look that we’re kinda obsessed with, mainly because it shouts to the world “leave me alone, don't touch me, don't rub my shoulders, don't call me cute, don't harass me, don't assault me,” without you verbally having to say anything. Wait, who are we kidding, you'll still have to say something, because you're in a backwards society! We're in a gender crisis! Saying "no" apparently isn't enough! And since we can't walk through the world wrapped in barbed wire and spikes, we guess this is the next best thing.

Huisman also took the spikes to another level by gluing them to the insides of her lips, like tiny fangs, which we can actually really get behind—sharp words and sharp teeth, right? Either way, though, we’ll contemplate trying both of these the next time we just really, really want to be left alone at a bar. Or in life. Basically, every single day, because it's come down to that. BRB—ordering some spikes.