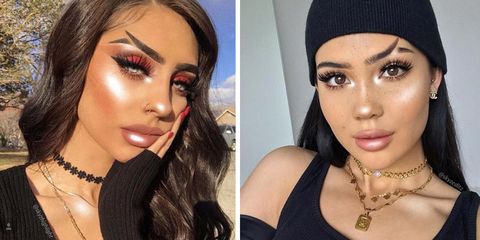 Who woulda thunk 10 years ago that the biggest trend maker of our generation would be the eyebrow? First came the infamous feather brow, then barbed-wire brows, then Christmas tree brows, and now, because the internet is a treasure trove, comes fishtail brows, the latest Instagram trend that we actually kinda, sorta, maybe like?

Yesterday, beauty mecca Huda Kattan posted a photo of herself with crazy arched, horn-like brows with a definitive split between them. “Fishtail Brows 🐠 Which do you like better?” she captioned the photo, noting that the photo of her is not actually real, but a doctored pic from the trend's original creator, Stefan (@skyzeditz).

So no, Huda didn't actually shave her brows, although we'd highly recommend it, because the look is killer.

Stefan first shared his fishtail look on Instagram a few days ago, with the caption, "Fishtail Brows 🐟 what do you think? 💘" The post quickly amassed more than 11,000 likes, and just like that, a new Instagram trend was born, with makeup artists and regular ol’ humans posting their take on the trend, to a mix of lovers and haters, who have taken to Instagram to voice their opinions. Like usual.

Fishtail brows.. Its a no from me dawg

I love fishtail brows idc what nobody saying

"I saw one of the models on America's Next Top Model with an upwards slit in her eyebrow and thought it was amazing, so I Photoshopped an extreme, more dramatic version of it onto a photo of Huda," says Stefan to MarieClaire.com, adding that he noticed "it looked similar to a fishtail," which is where the name originated. "Huda then reposted my photo, and it has become a massive trend that everyone is now doing," he says.

Of course, eyebrow slits (which involve shaving tiny lines into your brows) are nothing new—they’ve been a longtime staple in the hip-hop community. And though fishtail brows are not quite the same thing, because they’re the result of meticulous combing and pencil shaping and pure Photoshopping, rather than shaving, they’re still obviously reminiscent of the OG slits, so, you know, credit where credit is due.

Still, if you’re into trying the trend out, which we fully support, please get inspired by these photos below, and let us know whether this is a yay or nay from you on the trend.

Chloe Metzger Deputy Beauty Director Chloe Metzger is the deputy beauty director at Cosmopolitan, obsessively writing about new makeup launches, the best hair products (curly girl here; whattup), and the skincare formulas that really work for every skin type (follow her on Instagram to see behind-the-scenes pics of that magazine life).
Advertisement - Continue Reading Below
More From Trending Beauty
Glitter Pumpkin Butts Are a Thing for Halloween
I Tested Meghan Markle's Top Beauty Products
Advertisement - Continue Reading Below
Behold: The Self-Tanner Fail to End All Fails
This Is Pinterest's #1 Halloween Makeup Idea
These 3 Products Cured This Woman's Acne
Princess Eugenie Just Dyed Her Hair Bright Red
13,000 People Swear By This Eye Cream
Post Malone Cut His Hair and Looks Unrecognizable
Shay Mitchell Will Only Use This One Concealer
People Are Freaking Out About Emma Stone's Hair