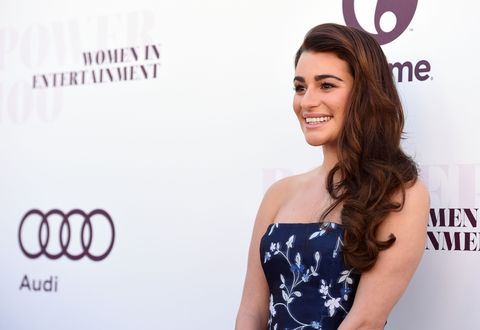 Pull up your mental #browgoals Excel sheet and make room somewhere between Collins, Lily and Olsen, Ashley: There's a new arch champ in town, and her name is Lea Michele.

The Glee star took a recent turn on the red carpet with darker, thicker arches than we've ever seen on her before, and the Internet was either like, "Does not compute" or "Houston, we have a problem." True, they're much more aggressive than the shorter, neatly trimmed eyebrows of her past, but hey—it's 2014. (And hopefully we've evolved enough not to make fun of someone who's only trying to do what we're all trying to do: cop Cara Delevingne's look. Or, you know, embrace what our mamas gave us.)

Besides, if you look back a few years like we did below, you can tell it's a simple case of her MUA going a little heavier with the pencil that day. Let's take a look, shall we?

Much improved, no? Those tails are growing in nicely.

We're getting there! You can see the beginnings of what some beauty authorities call the "fan," which is when the inner corners stand straight up and feather out. (You want a fan.)

And this is how it's done: full yet groomed, with two glorious fans.

See our note above about the overdrawing. But at least you know she's got brows on fleek underneath 'em.

Why I've Embraced My Natural Brows

Chelsea Peng I'm Chelsea Peng, the assistant editor at MarieClaire.com.
This content is created and maintained by a third party, and imported onto this page to help users provide their email addresses. You may be able to find more information about this and similar content at piano.io
Advertisement - Continue Reading Below
More From Beauty
At-Home Laser Hair Removal Devices That Work
This Magic Hair Straightener Brush Is On Sale
Advertisement - Continue Reading Below
Crest's Cult-Favorite Whitening Strips Are On Sale
Marie Claire Editors Share Their Favorite Mascara
This Techy Rotating Curling Iron is On Sale
The Brow Growth Serums That Really Work
The Best Editor-Approved Lip Scrubs
FOREO's Game-Changing Brush is on Major Sale
Revlon's Cult-Favorite Brush is on Major Sale
Your New Favorite Retinol Is Made From Caviar