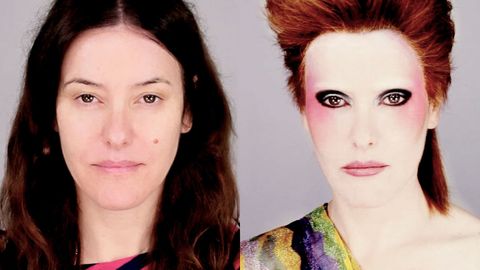 In the event that you haven't heard of Lisa Eldridge, she's a brilliant makeup artist who's lent her talents to the likes of Kate Winslet, Rosie Huntington-Whiteley, and countless others. Basically, Eldridge is the Dumbledore of makeup, that's how magical she is—and she also happens to do tutorials where she transforms herself into other celebrities.

Eldridge's videos only pop up occasionally thanks to the fact that she has a full-time job, and her latest is undoubtably her greatest: David Bowie circa the final Ziggy Stardust and the Spiders from Mars concert in 1973 (the original look was courtesy of Pierre la Roche).

Makeup transformations aren't exactly new territory on the internet, but Lisa Eldridge's talent is other-worldly, and watching herself transform into Bowie is a must-watch.

Almost as exciting as the transformation itself is the fact that the video's peppered with fun facts—including David Bowie's makeup influences and his favorite makeup supplies (original Khol from India, for example). Oh, and bonus: did you know that when Kate Moss did her Bowie-inspired British Vogue shoot with Eldridge's husband, Robin Derrick, Bowie's IRL clothes were too small for her? Mind-blowing.