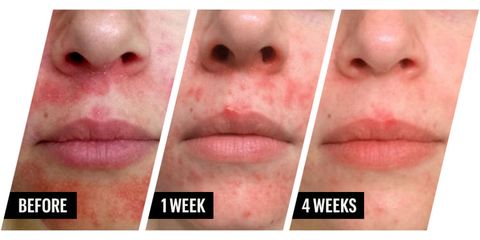 If you've ever dealt with breakouts, or skin rashes, or dermatitis—basically, anything even slightly annoying on your face—then you know how frustrating the process of curing it can be. Either you spend a bunch of money and time on dermatologist appointments, or you spend a bunch of money and anger on drugstore "miracles," or you give up and hide in a pit of self-loathing under your bed.

No? Just me? Cool. Welp, what if I told you that the fix for your skin woes is found in that sticky plastic bear in your cupboard? Because according to one woman who just posted an insane before-and-after photo on Reddit, the cure for her skin was a few dollops of good ol' honey.

In a post titled, "I cured facial sebhorreic [sic] dermatitis using a raw honey mask!" one user uploaded four photos of her skin before treatment, after one week, after two weeks, and after four weeks, with a hugely noticeable difference in each picture.

"I've struggled with an outbreak of facial sebhorreic [sic] dermatitis since April," the user writes, explaining how even multiple dermatology appointments and steroid cream prescriptions weren't giving her relief for her itchy, peeling seborrheic dermatitis, which is caused by an "overgrowth of yeast that's already naturally on all of our bodies," says dermatologist Mona Gohara, MD. 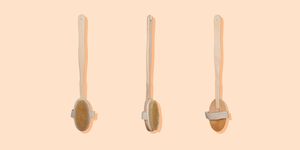 Is It Actually Worth It to Dry Brush Your Skin?
Is That New Beauty Product Breaking You Out?
So when the Reddit user found a small study that showed "30/30 patients had their condition disappear after using a raw honey mask for three hours every other night," she tested it out on herself. "After washing with mild cleanser, I massaged a thin layer of raw honey into the affected area and left it for three hours, simple as that," she writes. "I cannot believe how quickly and relatively painlessly this worked. I plan to continue the treatment every other or every third day until all traces of seb derm are gone, and then to continue weekly for six months, as the study indicates, to prevent it from coming back."
Courtesy of Brand

And if this sounds like complete bullshit to you—I get it. But there's actually some scientific proof of honey's magical powers for not only dermatitis, but for acne, too: "Honey does have known antibacterial properties," says Gohara, noting that although she usually treats seb derm with antifungal creams combined with intermittent cortisone cream, "honey could have an effect on yeast as well."

Of course, as with all medical and non-medical skin advice, remember that your mileage may vary, and though this user cleared her skin with a few dabs of honey (Nature's Nate's Honey, to be exact), you may need some stronger ammo to treat your acne and rashes. Still, if you're not feeling the prescription life, try this easy DIY at home, first.

Chloe Metzger Deputy Beauty Director Chloe Metzger is the deputy beauty director at Cosmopolitan, obsessively writing about new makeup launches, the best hair products (curly girl here; whattup), and the skincare formulas that really work for every skin type (follow her on Instagram to see behind-the-scenes pics of that magazine life).
This content is created and maintained by a third party, and imported onto this page to help users provide their email addresses. You may be able to find more information about this and similar content at piano.io
Advertisement - Continue Reading Below
More From Skin Care Tips for Any Skin Type
Eye Creams That Work Wonders on Puffiness
The Beginner's Guide to Retinol
Advertisement - Continue Reading Below
Your Complete Guide to Treating Dark Spots
At-Home Laser Hair Removal Devices That Work
Dermatologists Are Obsessed With Vitamin C Serum
Products That'll Actually Help Keratosis Pilaris
Why You Should Invest In a K-Beauty Sunscreen
Face Oil Will Give You the Best Skin Ever
The Absolute Best Moisturizers for Treating Acne
Tea Tree Oil Is a Great Zit Fix for Sensitive Skin