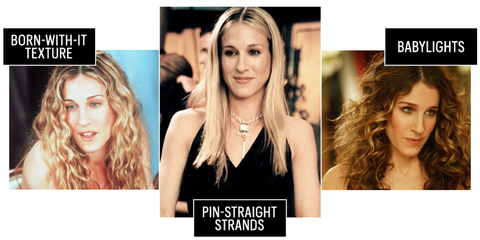 Unlike some of Carrie Bradshaw's choice outfits—we're still recovering from the white-tank-and-flower-pin combo of season 3—many of the ways she styled her I-can't-be-tamed curly blonde can totally hold their own in 2016. Years later, we're still seeing everything from her natural fluffy curls of the early Sex and the City's days to her larger-and-in-charge buns on the runways and red carpets alike. So, here are 11 reasons you can write your SATC binges off as good-hair-day research.

Yes, having the "new Yankee" on her arm didn't hurt, but in my mind it was Carrie's here-and-there accent braids that really sealed the deal on the laid-back, I'm-doing-just-fine look she sported while running into Mr. Big for the first time post break-up. For a 2016 update, look to the Louis Vuitton Spring 2016 runway where the plaits were micro and ultra-tight.

Kendall Jenner is nothing if not the 2016 advocate for loose, in-your-face wisps and they're verrry similar to those that Carrie sported in Season 2, as she lamented Mr. Big's new relationship with Natasha inside a horse stable. Furthermore, it seems both ladies love them some practical half-up, half-down action.

Side note: I feel like Bradshaw would have been a total half-bun enthusiast last year.

Dirty blonde, free-flowing curls are Carrie's hallmark look and when Stella McCartney sent new-girl-on-the-block Frederikke Sofie down her spring runway with the model's natural, Pre-Raphaelite waves it made me want to retire my flat iron forever.

Bradshaw was way ahead of the game in season 6 when she eased her way into becoming a brunette by adding dimension to her chocolate brown hue with golden babylights. A signature look of Victoria's Secret Angel Lily Aldridge, it's the new, natural ombré.

While Carrie was a pioneer of today's embrace-your-natural-texture movement, I'll never fault her for changing things up. There's no denying that she looked ravishing (I mean, Mr. Big definitely thought so in this emotionally-charged Season 2 episode) when she flat ironed her curls into submission for a night—very Victoria Beckham Spring 2016, if you will.

Through the years, Carrie never shied away from volume—and she had the '70s look on lock whenever she let her natural ringlets erupt into a mushroom cloud of disco curls. In September, Diane von Furstenberg revealed that her spring runway hair look was an ode to the first time she wore her hair curly to Studio 54, which is so Bradshaw owning her c-c-c-curls, you know?

When her personal style took an I'm-so-chic-I-wear-leather-half-gloves in the Sex and the City movie, Bradshaw streamlined her natural texture with polished loose waves. Amber Heard, who tends to embrace Bradshaw's typically more laissez-faire approach towards her mane, recently went a little more polished with high-shine, bendy waves.

I totally acknowledge that pigtails aren't for everyone, but if you're looking to switch things up à la Bradshaw, they did get an endorsement from Marni's experimental spring runway. Whether playing with lived-in-texture like Carrie or going ultra-streamlined, it's fair game in 2016. Just sayin'.

The perfect solution for when you're dealing with unruly texture, both Carrie and RiRi know the I've-got-it-together trickery you can swing by piling it all on top of your head. But here's the thing, while you might be tempted to reach for a sock bun, let it be known that we feel about them the way Carrie feels about scrunchies...

Again, even I can't deny my love for a stick-straight look on Carrie and the ever-so-casual side low pony she sported while getting a sugar rush with Stanny thanks to Charlotte's maybe-gay pastry chef boyfriend in Season 2. The 2016 version of this look comes courtesy of Dior Fall 2015 slicked-back, Rapunzel-like pony.

When Carrie started contributing to Vogue, she lobbed off all her hair for a shoulder-grazing cropped 'do. If she'd done it today, we imagine it'd look something like Rosie Huntington-Whitely's lob-du-jour, which is side-parted and doused with a few imperfect waves.

Lauren Valenti Associate Web Editor I’m the associate web editor at Marie Claire.
This content is created and maintained by a third party, and imported onto this page to help users provide their email addresses. You may be able to find more information about this and similar content at piano.io
Advertisement - Continue Reading Below
More From Beauty
The Absolute Best Moisturizers for Treating Acne
Anya Taylor-Joy Stuns at the Golden Globes
Advertisement - Continue Reading Below
The Prettiest Beauty Looks at the Golden Globes
Laverne Cox's Bridgerton–Inspired Updo Is Spot-On
Black Hair as Art
Glycolic Acid Toners to Leave Your Skin Glowing
Found: All-Natural Makeup Brands That Deliver
How Model and CEO Miranda Kerr Does Self-Care
Tea Tree Oil Is a Great Zit Fix for Sensitive Skin
Pretend You're on Vacation With Beachy, Wavy Hair