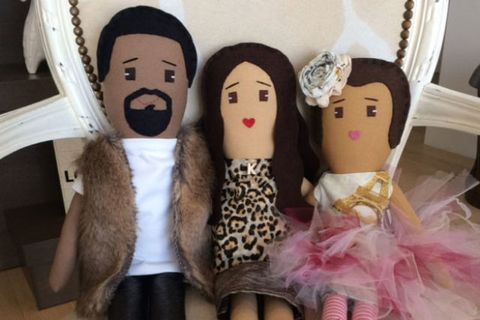 Most little kids have a few baby dolls, Barbie dolls, and maybe the odd Disney princess doll. (Personally, I always had a thing for my mini Aladdin. Something about that shiny purple vest...) But, if you hadn't realized by now, North West isn't like most little kids. North West sits front row at Paris fashion week. She wears custom-made Givenchy. And she plays with doll versions of her own parents.

Yes, the adorable spawn of Kim Kardashian and Kanye West now has her very own squishy, mini-sized versions of her famous mom and dad. Created by Brooklyn doll-maker Celine's Dolls, the toy-sized likenesses of the dynamic duo feature custom-made faces, hair, and outfits. There's even a cute little doll of Nori, herself.

We spoke with the woman behind the dolls, Celine Choi, about her tabloid-friendly clientele—and it turns out, the whole thing was even more of a family affair than we realized. Originally from Paris, the Williamsburg-based Choi had been crafting and selling dolls for three years when she first got the Kardashian call (kall?) in August 2013. Initially, it was from older sister Kourtney—who commissioned Choi to create dolls based on her own family, and later, their pet cat.

Naturally, Kourt's niece North needed her own—which she received as a first birthday gift. But the creation of the dolls was no easy feat. "I spent hours studying the most recent pictures of their family; of Kim and Kanye together and Kim and North and Kanye and North and each individually," Choi tells us. "I wanted to be true to each member's unique taste and personality, but have the family still functioning aesthetically together." That meant tiny red Air Yeezys ("My pride!" says Choi), a faux mink vest, and leather pants for Kanye, a lamé pencil skirt and bling for Kim, and a vintage Parisian print and removable tutu for North—because "Paris is so special to their family."

"My dolls are more than look-alikes," Choi explains. "They really capture the child's or person's essence. I ask every client what makes their child one of a kind, and I create a one-of-a-kind doll so that the child is always reminded how special and unique she or he is—and how it's a beautiful thing and should be embraced." (The Wests skipped the questionnaire.) Choi specializes in making dolls of all skin tones to celebrate that individuality. "I do a lot of Hispanic and biracial dolls, because they're missing on the market. I really get into shades of skin and eyes and hair… "

But that unique element doesn't come cheap. Each doll starts at a base price of $198, which increases with specific requests. "People ask me to make little Chanel purses for their dolls or add a special bling," says Choi—and she's always up for the task. We can only imagine how much those tiny leather jogging pants tacked on!

"The dolls are quite taller than they appear," Choi continues. "Mini Kanye is probably around 23 inches tall, and Mini Kim around 21 inches. They are quite big for little ones—perfect dancing partner size!—but they are so lightweight and soft, that it's love at first sight and touch!" So, if you've ever wondered how Kim Kardashian and Kanye West's baby spends her time when she's not mingling with top fashion designers and editors, now you've got a pretty good idea: She's dancing with her dolls. Of her parents. Aw.