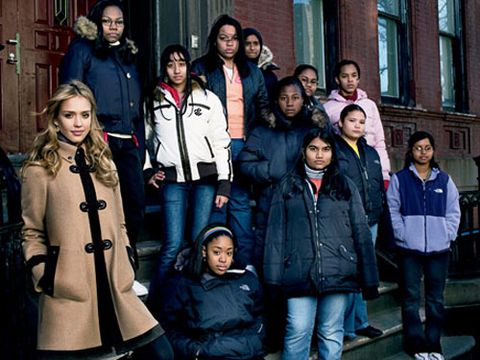 We're headed north from her suite at Manhattan's Gramercy Park Hotel to a Harlem school for "Goddess Day" — not a mani-pedi party, but rather an afternoon-long workshop hosted by Step Up Women's Network, a national women's and girl's empowerment organization Alba volunteers for regularly. En route, she fidgets with her boots, inserting drugstore-bought orthotics, and sits in her seat so primly, she's either nervous as hell or the secret spawn of some uppity finishing school. Alba takes me through the perfunctory matter of two upcoming movies: In The Love Guru, she owns a hockey team and falls for a Deepak Chopra/Austin Powers hybrid played by Mike Myers; in The Eye, she appears as a blind violinist who endures freakish complications after corneal-transplant surgery (i.e., she sees dead people). Then we talk about the day ahead.

"I just hope I say the right thing," Alba, 26, tells me. "I think these girls can relate to me, to the fact I didn't have rich parents or any nepotism working in my favor." Her father was in the military, moving the family from Mississippi to Texas before settling them in Laverne, CA. Alba is Mexican on her father's side, and Danish and French on her mother's. "I don't fit in with one race," she says.

In person, Alba looks even younger than she does on-screen — finely and delicately proportioned, almost tiny. Button nose, doll lips. Her eyelashes, however, are the stuff of hyperbole. They're long enough to propel her into flight; a couple of rapid blinks and she'd be gone.

She tells me she misses her boyfriend, Cash Warren, coproducer of an upcoming documentary on gang warfare, who's back in L.A. watching football with her dad. "I'm away too much," Alba laments. "It's not healthy." And yet she knows her problems can't begin to compare with those of the girls from low-income, high-density neighborhoods like the one we're driving through now — girls who sometimes have babies to cure their loneliness. "They aren't ready to be mothers," Alba says. "There's no more 'you' after having a kid, but they're too young to understand that. They see the world in their 10-minute reality. They don't see the big picture because you can't have that kind of perspective when you're that young."

Spoken like a woman who's earned "that kind of perspective." A week from now, Alba will announce her own pregnancy. Soon after, she and Warren will get engaged.

The school, on 106th Street, called the Young Women's Leadership School, is all gray slab and black glass. Eleven New York-area seventh- and eighth-graders wait inside. None of them knows that Alba is coming.

When she walks into the gym, the girls, who are standing on a stage, shriek loudly. Then they hold their breath in case they aren't supposed to scream. Then nobody yells at them for screaming, so they scream again. "Oh, my God!" "Oh, my God!" "I've seen Honey 10 times," one says. Alba bows her head: "Thank you." In most of the world, Honey, the coming-of-age tale of an urban dancer, is uniformly panned. Not so here in Harlem, where the story is set. "I learned to dance for that movie," says Alba, looking at the girl. "I learned to dance from that movie," says the girl, looking at the floor. Others compliment her work in both Fantastic Four flicks — "I like you as a superhero" — and also her role in a recent thriller called Awake. They were probably too young for Alba's breakthrough eight years ago, on the television sci-fi drama Dark Angel. Thankfully, not a single one comments on her stripper work in 2005's Sin City.

Introductions go fast: "Muriel." "Imani." "Norma." "Arena." "Samantha." "Aziza." "Mala." "Diamond." "Aleesha." "Geetanjali." "Destiny." Alba says they have excellent names, and wonders aloud why her mom, Cathy, who is sitting in the back, gave her such an ordinary one. Then Alba sits among them in a circle.

The girls seem awed by her, but Alba knows how to keep it real. "Nobody believed I could make it," she tells them, "and the industry still doesn't." Later, when a girl asks what she likes least about her job, Alba, cross-legged on the checkerboard linoleum, pauses, gathers, and releases: "There's a lot of pressure on women to fulfill certain fantasies. They expect you to be a little bit of a tart, to flirt with all the men. A lot of women do it. But I'm not doing that. I talk with these guys about their wives and kids right away. When they say inappropriate things, I let them, because boys will be boys, but I'm not looking to participate in their conversations."

The girls are locked on Alba, sitting as close to her as possible without sitting on her. They look weathered in a way Alba never will, unless it's for a role. Her hair glints in the light. It possesses an haute caramel confectionery brilliance. But something happens when she sits in their circles, participating in various trust-building exercises. She seems to spread her luster. Each girl's face brightens considerably as the day moves on, and Alba starts to blend in.

For more about Jessica Alba and her work with Step Up, check out the March 2008 issue of Marie Claire.