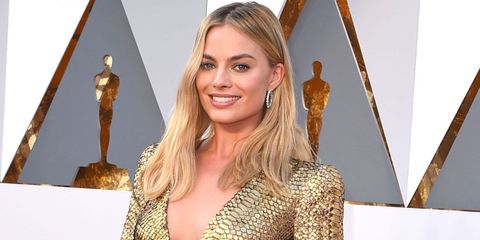 Despite recently admitting she's struggling to shake off her recent role as figure skater Tonya Harding in the biopic I, Tonya, Margot Robbie might be faced with one of most challenging roles to date, as she's rumored to be considering playing one of Hugh Hefner's wives in an upcoming film.

The Mirror reports the 27-year-old is in talks to star in a film about the late Playboy entrepreneur, years after declining to appear in the 91-year-old's magazine.

The publication reports the star is in discussions with director Brett Ratner to play one of Hefner's wives, which would incidentally see her reunite with her Suicide Squad costar Jared Leto, who is reportedly confirmed to play the magazine mogul.

Leto is reportedly keen to get Robbie on board, with a source revealing: "Jared is working on the movie with his buddy Brett and they're really pushing for Margot to have a major role. She's perfect for a part and he's not going to give up until she accepts."

It's unknown which of the late tycoon's wives Robbie would play; Hefner was married three times during his life, first to student Mildred Williams, then to Playmate Kimberley Conrad, and lastly to Playmate of the Month Crystal Harris.

In 2014, Hefner once reportedly tried to recruit Robbie to feature in his magazine.

"She should be in Playboy! Send her a message!" the CEO told US magazine of the actress. "We're ready for her. She would be great."

Katie O'Malley Deputy Digital Editor Katie O’Malley is the Deputy Digital Editor, at ELLE UK.
This content is created and maintained by a third party, and imported onto this page to help users provide their email addresses. You may be able to find more information about this and similar content at piano.io
Advertisement - Continue Reading Below
More From Celebrity
Sam Asghari Opens Up About Britney Documentaries
Prince Harry’s Memoir Is Concerning Royal Insiders
Advertisement - Continue Reading Below
Meghan Markle Wore Some Familiar Earrings in NYC
Harry and Meghan Could Visit England for Christmas
Meghan Markle Looked Gorgeous at Global Citizen
Harry and Meghan Are Taping Their NYC Trip
Keep an Eye on Lady Louise Windsor
Princess Beatrice's Daughter May Get a Royal Title
James Middleton’s Wife Thought He Was a Waiter
Meghan Markle Got a New Nickname