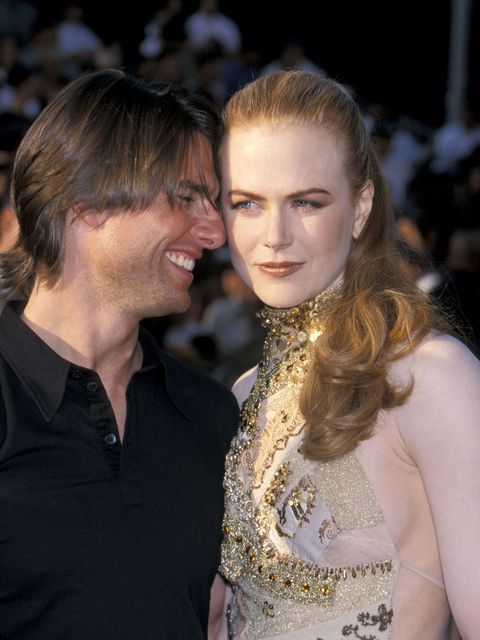 You probably haven't spent too much time thinking about Tom Cruise and Nicole Kidman's marriage lately, but a new documentary is about to change that. Going Clear, Alex Gibney's exposé on the Church of Scientology, makes some shocking claims about Cruise, one of the church's most famous (and infamous) members.

The film suggests that the Church of Scientology intimidated Cruise into breaking up with Kidman because they were suspicious of her father, a prominent psychologist. In fact, her dad's position put Kidman on the "Potential Trouble Source" list, which the church says is for people "who are in some way connected to and being adversely affected by a suppressive person."

Going Clear also claims that between 1992 and 2001, Kidman pressured Cruise into distancing himself from the Church of Scientology. When Cruise went MIA from the organization, his silence allegedly made Church head David Miscavige so angry that he tasked second-in-command Marty Rathbun with "facilitating the breakup between Tom and Nicole," Rathbun says in the film.

According to Rathbun, the church started a task force to get Cruise to dump Kidman, which included wiretapping her phone—Cruise's suggestion—and sending the tapes to Miscavige.

The Church also "audited" Cruise by gathering every bit of personal intel they could dig up. This information was purportedly given to Miscavige, who later shamed Cruise for his "perverted" sexual fetishes.

And what's worse than having "perverted" sexual fetishes (whatever that means in this context), the Church attempted to turn Cruise and Kidman's adopted children—Connor and Isabella—against their mother so Cruise could take custody.

In 2001, Miscavige got his wish. The couple divorced and Cruise, who became more active in the Church, went on to receive their Freedom Medal of Valor, which is given to a person who "brings greater freedom to mankind."

Going Clear also suggests that the Church of Scientology goes out of its way to please Cruise by buying him limos, airplanes, and once, they even created a meadow for Cruise and Kidman to frolic in, which was apparently one of Cruise's greatest fantasies.

This is all particularly interesting in light of the rumors that cropped up during Katie Holmes's divorce from Cruise in 2012, which also claimed that Scientology got in the way. Add these to the Maybe Don't Date a Scientologist file...

Here, a video recap made by our friends at Splash:

Jennifer Lopez Makes a Heart-Breaking Confession About Her Divorce