A terror attack in New York City yesterday left eight people dead and 11 injured after a driver plowed through pedestrians and cyclists on a bike path in Lower Manhattan. In the wake of the tragedy, fellow city dwellers, everyday civilians, celebrities, and politicians sent messages of support to the victims and their families and praised New Yorkers for their strength and resilience in the face of hardship. 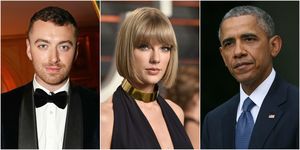 Meanwhile, others pointed out and challenged Islamophobic responses to the attack. The driver was identified as 29-year-old Sayfullo Saipov, who planned out the act of terror weeks ahead "in the name of ISIS," according to officials, CNN reports. This lead to some commenters' offensive remarks against Islam as a whole.

Gigi Hadid, who is Muslim, added her voice to those fighting Islamophobia when she clapped back at someone on Twitter who criticized women in New York for wearing hijabs near the crime scene today.

"Muslims are out in full force at the scene of the NYC #ISIS attack today rubbing it in everyone's face. Aimlessly walking around in hijabs," journalist Laura Loomer said in an infuriating tweet. "You'd think they'd have the decency to not walk around in hijabs @ cross street of the attack. But they don't. I bet they're loving this."

Hadid responded: "Laura, I hate to give you the attention, but I need to tell you- You're a f**king moron."

Laura, I hate to give you the attention, but I need to tell you- You're a f**king moron. https://t.co/fCezijj2Ao

Gigi and her sister Bella have been vocal about their faith, especially in the wake of Trump's immigration ban earlier this year (which they protested in New York in January). Their father, Mohammed Hadid, came to the U.S. as a refugee from Palestine when he was a child. "He was always religious, and he always prayed with us," Bella said of their dad. "I am proud to be a Muslim."