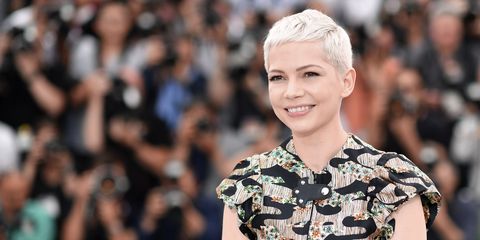 Another celebrity wedding is coming. Michelle Williams has reportedly said "yes" to New York financier Andrew Youmans. While the couple has never made a public appearance, multiple sources confirmed their engagement to Us Weekly. The All the Money in the World star wore a heart-shaped diamond ring on her wedding finger to the 2018 Golden Globes, creating engagement speculation.

She was also spotted wearing the ring on New Year's Day in the Bahamas with Youmans and her 12-year-old daughter Matilda.

Williams' engagement comes almost exactly 10 years after Heath Ledger's death in January 2008. She and Ledger had broken up just weeks before he overdosed. Since his death, Williams has been very private about her personal life, which is, some say, why she has yet to make an official announcement.

“She wants a good guy and a stable family life,” said the source.

Related Story
Michelle Williams Responds to Mark Wahlberg
Alex Warner
This content is created and maintained by a third party, and imported onto this page to help users provide their email addresses. You may be able to find more information about this and similar content at piano.io
Advertisement - Continue Reading Below
More From Celebrity
Doug Emhoff Reacts to Kamala Harris's Googling Him
Harry Was Homesick for a While, But Is Happy Now
Advertisement - Continue Reading Below
Chrissy Teigen's Therapist Inspired Her New Hobby
J.Lo Claps Back After Botox Comments
Katie Just Posed in a Shirt Her Boyfriend Designed
Meghan Wasn't Appreciated for Royal Contributions
Harry & Meghan Have Had a Painful Year Since Exit
The Queen's Hot Grandnephew Is a Thirst Trap
Watch Diana Play Impromptu Piano in Rare Clip
Peek Inside the Cambridges' Country Home