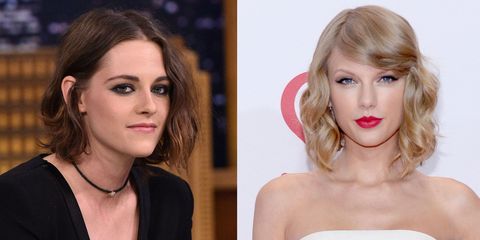 Imagine a world where Kristen Stewart dressed like her polar opposite, Taylor Swift...not once but twice. Crop top, short skirt:

This crop top has sailboats!

This crop top is checkered!

And to top it off, a matching  squad member:

That world exists! But only in fiction—specifically, in an untitled Woody Allen movie that appears to be set long before Taylor Swift was born.

And it should be noted that Taylor has also tried a more KStew-ish look before...when shooting Valentine's Day way back in 2010:

Ah, the power of cinema!