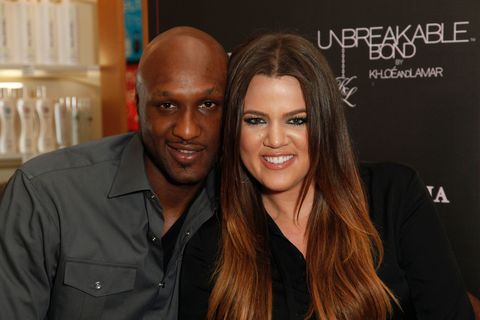 Lamar Odom has reportedly been discharged from his Las Vegas hospital and transferred via helicopter to a new hospital in Los Angeles. E! News reports that Khloé Kardashian was by his side in the helicopter as they made the journey.

While it's still believed that Lamar has months and months of recovery ahead of him, he has made an astounding recovery in the days since he was first found unresponsive in a Nevada brothel.

After showing remarkable improvement, including speaking and passing various tests like a "swallow test," it looks like Odom has been cleared to be moved to a Southern California hospital, closer to home. According to E! News, the move would also help Khloé (who is still legally married to Odom and reportedly making his medical decisions) remain by his side as he continues to recover.

"She goes everywhere with him. If Lamar leaves the room for testing, she follows," the source told E! News.

Reports also indicate that doctors are still gravely concerned about Lamar's prognosis. He is reportedly on dialysis and according to sources close with the family who spoke to People, his kidneys are so damaged that there is talk of a possible transplant in the future.