Fifty Shades Freed doesn't have to make perfect sense for it to be enjoyable. But there are some problems. Ridiculous blessings, if you will. Below, a list of moments and quotes that made even the most devoted Fifty Shades horndog go, Wait, did that really just happen? You bet it did, and before you could say "popsicle," the film dropped another one. And another... you get the picture.

1. Christian turning to Ana to say, “Let’s get out of here” after like, two dances at their own wedding while the party is in full swing. Mr. and Mrs. Grey. You guys. I know you have a lot of post-wedding boning to get to, but hang out with your family for another minute. What’s the rush? It's not like you have a commercial flight to catch. (LOL at you trying to picture Christian flying economy right now.) The Grey private jet can wait.

2. The Hawk & The Sea, the title of Christian’s hardcover seen on the beach during his honeymoon. Don’t worry, this is not a real book… yet. Do you think it’s about Christian and Ana and how Christian is preying on her all the damn time? Too much?

3. “It’s Boobs in Boobland!” – what Ana says to Christian on the beach during their honeymoon. I see what you did there, Ana the new Fiction Editor at SIP.

4. Ana gets a new office while she’s on her honeymoon. As coworker Liz says, “It happened, and you weren’t even here.” It’s nuts, Liz. NUTS!

5. “I tried emailing you. It bounced.” – Christian to Ana, approximately two minutes after she gets into her new office. OK Christian, we get it. You’re mad that your wife hasn’t taken your last name, but did you have to interrupt her first day of work post-honeymoon to give her the third degree? Chill, bro.

6. How obsessed the women of Freed are with Gia the architect’s boobs. In the film, the ladies keep on referring to Gia's chest as her "plans."

7. “That GQ profile on you? I love what you’re doing in Africa.” – Gia to Christian at the house he just bought for Ana. In the words of Randy Jackson, yeah that’s gonna be a no from me dog.

8. “You can climb into your shit-colored car and drive back to Seattle.” – Ana to Gia, moments after delivering, “You may call me Mrs. Grey.” Give this woman a TV show. And Gia, get a new car!

9. “You were right about his built-in readership.” – Roach, Ana’s boss, to Ana, about Boyce Fox. Yet another reminder from the movie that Ana actually works at her job, three hours at a time.

10. Ana mumbling something about the font size for Boyce Fox’s book cover. Yes, because two sizes makes all the difference when it comes to sales.

11. Every second of the car sex scene. It’s not realistic, and thankfully, it only lasted for approximately 9 seconds.

12. “I had a dream you were dead.” – Christian to Ana. There’s a similar line in the book and it turns out, it’s even worse on screen.

13. “We have something you could use.” – Ana to Prescott and Sawyer, post Jack break-in at Escala. Ana offers cable ties to her bodyguards after they take down Jack. Good to know cable ties are also good for non Red Room purposes!

15. Bath time with Christian and Ana in Aspen. Perfectly normal, sexy couple taking a bubble bath together. Dialogue: Do you think your brother is cheating on Kate?

16a. Every second of the vanilla ice cream sex scene.

16b. Tonguing ice cream out of Christian’s pubes, specifically.

17. Elliot proposes to Kate in a club. This is the second most ridiculous thing after Christian’s GQ profile.

18. Ana hardcore flashing back to her butt plug session while at work. Is that drool on her desk? And see? She’s working!

20. “Babies happen when people tend to have sex!” – a pregnant Ana to Christian. She doesn't say this in the book, so it's a bit silly of the movie to include this brief Sex 101 lecture.

22. The flashback montage of all the Fifty Shades movies. OK fine, the pommel horse #TBT was fantastic. Ridiculous. But fantastic.

23. Every second of this movie, TBH. Fifty Shades forever. 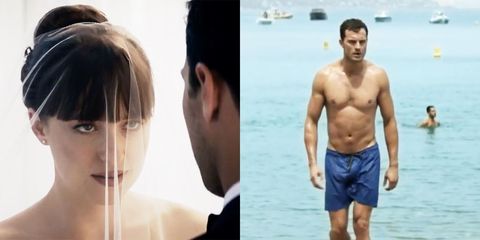