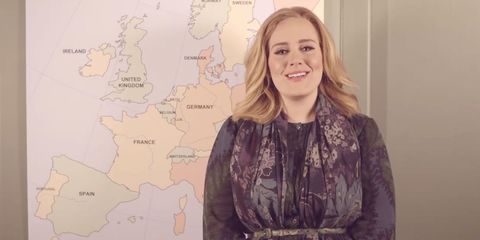 Adele announced last night that she's going on tour for the first time in five years, all while imitating Harry Potter/a weathergirl–because, sure!?!

Adele has been pretty coy about whether she would tour behind new album, 25, much to the agony of her many fans. But in a video posted to her Facebook page, she revealed that she was totally "bluffing", and that "of course" she would do some concert dates. But only in Europe.

Using a Harry Potter wand (with an illuminated tip, no less), Adele pointed out the countries she will be gracing with her powerhouse voice on a map behind her. The 36-date run is set to kick off in Belfast on February 29th, before wrapping in Belgium on June 13th.

Adele chatted about the possibility of a tour earlier this month, tellingRolling Stone: "When I've sat down and thought, 'What can I do to bring something new to the table?' It was just like, 'Tour.' Because I haven't done it properly."

Tickets for her Glasgow, Manchester and Birmingham shows go on sale at 9am, December 4th on Ticketmaster, with further cities to follow. So...who's ready to book a ticket to Europe?