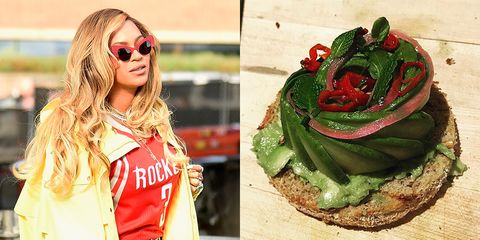 Beyoncé is 44 days away from her long-anticipated turn headlining Coachella (she was supposed to headline the 2017 festival, but had to pull out on account of being very, very pregnant with twins Rumi and Sir) and she is in deep focus prep mode.

She's prepping for her performance with avocado toast—and Instagramming it like a true millennial.

Okay, so the avocado toast isn't exactly the secret to Bey's prep plan. She's actually going full vegan, as she explained in her Instagram caption, and she's inviting fans to join her on the journey.

"44 days until Coachella!! Vegan Time!! Click the link in my bio to join me! 💪🏽✨." That bio link takes you to the 22 Days Nutrition meal planner challenge. And since we all know Bey isn't much for going #spon on Insta, we had to know what that was all about.

What is 22 Days Nutrition?

It's a company that sells clean, organic, plant-based foods in the form of meal delivery plans. Why 22 days? Because, according to the company's website, psychologists say it takes 21 days to make or break a habit. That makes 22 the magic number for making a habit you'll actually keep.

How is Beyoncé involved with 22 Days Nutrition?

Back in 2015, she cofounded the challenge. In 2013, she and Jay-Z took the challenge themselves and he even blogged about.

Why is Beyoncé going vegan for Coachella?

The short answer is: Health. The slightly longer answer is that Bey had a great experience with the 22 Days challenge in the past and she wants to be in top form during her highly-anticipated Coachella gig.

“They loved it,” Marco Borges, Bey’s trainer and the creator of the 22-Day Revolution meal challenge, explained to People in 2015. "They walked away with a greater understanding of the powerful benefits of plant-based nutrition. They were getting people saying, ‘Your skin has this glow.’ And who doesn’t like being told they look awesome?

Kayleigh Roberts Contributor Kayleigh Roberts is the weekend editor at Marie Claire, covering celebrity and entertainment news, from actual royals like Kate Middleton and Meghan Markle to Hollywood royalty, like Katie Holmes and Chrissy Teigen.
This content is created and maintained by a third party, and imported onto this page to help users provide their email addresses. You may be able to find more information about this and similar content at piano.io
Advertisement - Continue Reading Below
More From Celebrity
Gigi Hadid Says She Voted With Her BB
Will Asked His Uncle to Talk to Harry About Meghan
Advertisement - Continue Reading Below
Why the Queen Denied Meghan's Wedding Tiara Pick
Will & Harry's Reactions to Their Parents' Divorce
LOL, Kelly Ripa Comments on Her Hubby's Bulge 🍆
Adele Talked About Her Weight Loss on 'SNL'
J.Lo Steps Out in the Perfect Autumnal Look
Harry & Meghan's Drama Won't Be on 'The Crown'
Will's Talk with Charles That Led Him to Kate
The Queen Saved Will from a Breakdown as a Teen