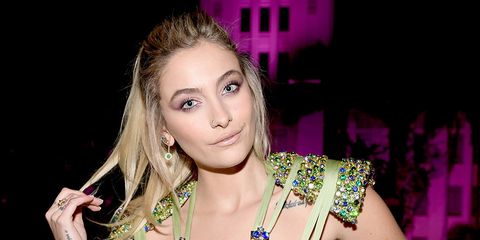 Paris Jackson loves her fans, and the fun photo edits they post for her, but she would really love it if they would stop editing one very important thing about her: her skin.

Jackson, the daughter of Debbie Rowe and the late Michael Jackson, who is now 19 and pursuing a career in film (she stars in Gringo, which is out this weekend), says fans often alter her skin color in photos and she would really like them to stop.

No, she's not talking about whimsical edits like this one, which reimagines her as an alien queen (a similar photo is actually her pinned tweet at the moment):

She's talking about fans who alter her skin color to make her look more white or more biracial.

She shared her feelings in a very direct tweet on the subject. "I appreciate everything y’all make for me, I enjoy every single edit I see," she wrote. "But please stop lightening my skin to make me look more white. And please stop darkening my skin to make me look more mixed. I am what I am. I'm aware of what I look like and I finally happy with it."

Paris isn't the first celebrity to be the victim of racially-based Photoshopping. Stars like Rihanna have had their skin color altered in photos as well:

And, of course, the issue goes beyond social media trolls. Women of color have long had to contend with fashion magazines altering everything from their skin tone to their natural hair in published photos.

Props to Paris for speaking out about this directly. We can only hope her fans will listen.