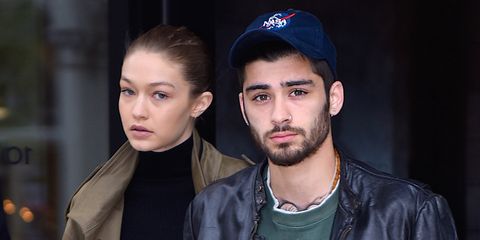 News that Gigi Hadid and Zayn Malik have broken up, following more than two years together, has come as surprise to many. And even though the former One Direction singer has already unfollowed his ex, and her mom, on social media, his Instagram posts hint at heartbreak.

In a series of photos posted last night, Malik looked a little melancholy, and his captions did too. Firstly, there was his, "When Life throws you lemons, catch em so they don’t hit you in the fucking face" post:

Then there was his perfect blond quiff framed by blue sky (but his facial expression was a little pallid):

Followed by this sullen selfie:

I'm not crying; you're crying!

Then the singer shared a series of photos of his shirtless torso, featuring that tattoo of Gigi Hadid's eyes, of course:

In a statement released after news of their break-up came out, Malik said of his ex:

"Gigi and I had an incredible meaningful, loving and fun relationship and I have a huge amount of respect and adoration for Gigi as a woman and a friend. She has such an incredible soul. I'm grateful to all of our fans for respecting this difficult decision and our privacy at this time, we wish this news could have come from us first."

"Breakup statements often seem impersonal because there is really no way to put into words what two people experience together over a few years...not only in the relationship, but in life in general. I'm forever grateful for the love, time, and life lessons that Z and I shared. I want nothing but the best for him and will continue to support him as a friend that I have immense respect and love for. As for the future, whatever's meant to be will always be. xG"

Love isn't dead, but it's definitely on hold.