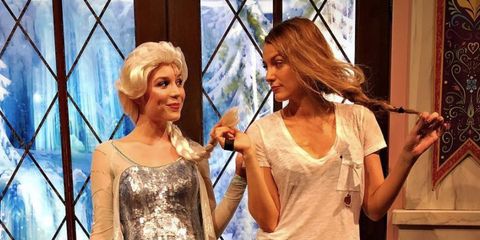 Blake Lively proved that she was enjoying a trip to Disneyland this week by posting some super cute photos on Instagram. But there was one person she wasn't impressed with—and that was Elsa from Frozen.

In a hilarious showdown between the two blondes, Lively asked, "Who wore it better..." as she held on tightly to Disneyland Elsa's braid. While Elsa looked pretty happy to be meeting Serena van der Woodsen in person, Lively looked less impressed about meeting the Disney icon. It's okay though—pretty certain that Elsa's braid is a wig; just sayin'.

And Lively's fun didn't stop there. In her Instagram story, she put out a call to Disney to make her the next Disney princess... or she'd even play Beast, apparently. She wants it that much:

In the photo, posing alongside Disney icons Ariel, Snow White, and Cinderella, Lively wrote, "@disneyland this is my official submission. Will work for minimum wage. Happy to be The Beast. Your move…"

She also met Mickey Mouse and found it pretty hard to keep her cool. Ryan Reynolds, watch out:

Plus, she even bought the obligatory "screaming on a ride" photo. When in Disneyland, after all... 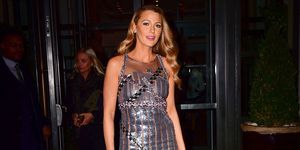 Earlier this year, Lively revealed that she's now lost the 61 pounds she gained during her pregnancy. In a typically hilarious caption, Lively revealed the secret to getting back in shape. She said, "Turns out you can’t lose the 61 lbs you gained during pregnancy by just scrolling through instragram and wondering why you don’t look like all the bikini models. Thanks @donsaladino for kickin my A double S into shape."

Amy Mackelden Amy Mackelden is a freelance writer, editor, and disability activist.
This content is created and maintained by a third party, and imported onto this page to help users provide their email addresses. You may be able to find more information about this and similar content at piano.io
Advertisement - Continue Reading Below
More From Celebrity
Eva Longoria Loves Her Mini Trampoline
The Royals Won't Wear Uniform at Philip's Funeral
Advertisement - Continue Reading Below
Jennifer Lopez and Alex Rodriguez Announce Breakup
Charles Teared Up As He Read Tributes to Philip
The Gucci Family Is Upset About 'House of Gucci'
Taylor Sent the Sweetest Gift to a Frontline Nurse
Royal Family Shares Rare Photo of Prince Philip
Chloe From 'Too Hot to Handle' Is in 'The Circle'
There's Drama Over Prince Harry's Funeral Attire
Jennifer's Rep Breaks Silence on Adoption Story