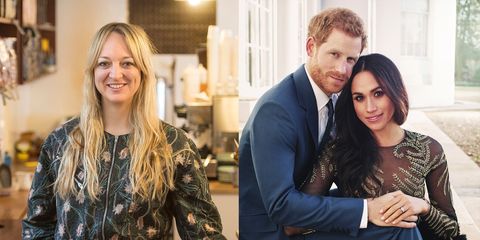 Kensington Palace has just announced that Prince Harry and Meghan Markle have selected their wedding cake. Eschewing the traditional British fruit cake, the royals will serve a much more unusual combination of flavors at their May 19 wedding, and that's thanks to Claire Ptak.

Markle and Prince Harry have opted for "a lemon elderflower cake that will incorporate the bright flavours of spring," and "will be covered with buttercream and decorated with fresh flowers." Here's everything you need to know about the chef behind the royal wedding's Spring-inspired cake:

1. Ptak owns a bakery in London.

Ptak runs Violet, a London-based bakery. On her website, she reveals how Violet came to be, saying, "I started my business as a market stall on Broadway Market, cooking from home before opening the café in 2010."

Tatler (via The Telegraph) described Violet as an "East London hotspot," that happens to sell "the best American-style bakes around."

The chef is extremely passionate about the city she lives in, and tells Gather Journal, "I live on the same street as my bakery. I have lived in this neighborhood for four years. It is my favorite street in London."

A little strawberry cake with some sweet peas looking for a home xx could be a birthday cake or an idea for the top of a wedding cake. See some of our other cakes here on this hashtag #violetweddingcakes

According to The New York Times, "Ptak is originally from California and worked at Chez Panisse in Berkeley under chef Alice Waters before moving to London."

In a profile by Gather Journal, it was revealed that Ptak started working in her local bakery when she was 14, and her talent developed from there.

3. Markle interviewed Ptak for The Tig.

After announcing the news via Twitter, Kensington Palace revealed that Markle interviewed Ptak on Markle's now-defunct lifestyle site, The Tig. Clearly, the Suits actress kept in touch with the baker, and reconnected upon her move to London.

Claire Ptak, who was raised in California, focuses on using seasonal and organic ingredients in her cakes. Ms. Markle previously interviewed Chef Ptak for her former lifestyle website The Tig.

4. Wedding cakes are her forte.

On April 9, 2017, Ptak posted on Instagram: "Wedding cakes are where I started and I love that i am now going back to them again after many years turning them down. They are so fun to make (albeit stressful) and there is nothing like assembling them in situ and the wonderful reactions that you receive from onlookers." Creating a cake for the royal wedding is a major commission, and proves that Ptak's work is greatly admired.

5. You can buy her cookbooks.

Ptak has authored several books, including The Violet Bakery Cookbook, which is described as "a design-forward cookbook for sweet and savory baked goods from London's popular Violet Bakery that focuses on quality ingredients, seasonality, and taste (as opposed to science) as the keys to creating satisfying, delightful homemade pastries, tarts, sweets and more."

If you're in Los Angeles, you can buy signed copies of my book at @gjustagoods next door to @gjustabakery one of my favourite places on earth. Merry Christmas everyone!!

She's also released several guides to making your own candy.

"All of my cakes are baked with organic flour, sugar, milk and eggs. Many of the other ingredients are organic as well, like our Madagascan vanilla pods and pure cane molasses. Limited edition buttercream icings that adorn our birthday cakes, cupcakes, and fill whoopie pies and biscuits, change with the seasons. They are made by whipping up butter and sugar then gently folding in fresh fruit purees, melted Valrhona dark chocolate, freshly brewed espresso, home-made flower cordials or dark caramel made with sea salt."

@semaine_online came to visit Violet. See what we got up to at the bakery. Link in profile. 💙

7. Her baking style is what attracted Meghan Markle to her work.

In an interview with Gather Journal, Ptak describes her style as "rustic but modern, feminine but not girly," which are likely all attributes which attracted Markle to Violet's cakes. As for her favorite flavors, Ptak reveals, "Simple, simple, simple. Of course making something simple is never easy."

A Victoria sponge wedding cake from last week that was just gorgeous. We can make these gluten free too! And with any of our delicious jams from @londonboroughofjam #violetweddingcakes