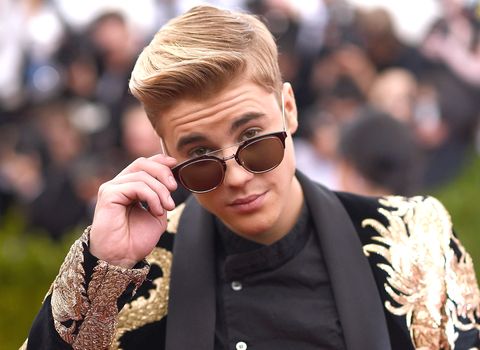 Tuesday night—just a week after Justin Bieber and Selena Gomez reportedly decided to take a break because Selena's mama don't like him and she likes everyone—Justin was spotted hanging out with the Sports Illustrated swimsuit model Baskin Champion, formerly known as "a mystery blonde." Surprisingly, fans were not pleased.

But apparently, the 24-year-old isn't taking the Ross Geller approach, instead Justin maintains that he just hung out with one girl to get back at the other. How very middle school!

A source told ET, Justin "knows everything he's doing is going to get out," and this appearance with Baskin was to prove a point. "[Selena is] off having fun with her friends and so he’s showing that he can still go out and have fun too," the source says. "And to be honest, I’m sure there’s a part of him that wants to make Selena a bit jealous! This seems like right out of the old Justin’s textbook! He was very manipulative with her emotions the last time and did stuff like this a lot."

Which, if I was Selena:

Meanwhile, Selena is hanging with friends in Australia, napping, baskin' in the sun, taking down body-shamers, and, hopefully, ignoring Justin's antics.

"Selena and Justin decided to take a break mainly because of Selena’s mom and her disapproval of Justin. Justin’s family loves Selena, but Selena’s family has put her in a very conflicting spot because they still don’t trust Justin," a source told Us Weekly when the break began.

A different source added: “Her mom was her rock when she was having her health complications. Justin and Selena decided to take a break to give her family some more time to heal and take in the idea of her and Justin being a couple again."

Related Story
Selena Gomez Posts Bikini Scar Photo Response
Sally Holmes Editor in Chief Sally is the Editor in Chief of Marie Claire where she oversees coverage of all the things the Marie Claire reader wants to know about, including politics, beauty, fashion, and celebs.
This content is created and maintained by a third party, and imported onto this page to help users provide their email addresses. You may be able to find more information about this and similar content at piano.io
Advertisement - Continue Reading Below
More From Celebrity
Chloe From 'Too Hot to Handle' Is in 'The Circle'
Comparing the Two Biggest Royal Weddings
Advertisement - Continue Reading Below
Kate, George, and Charlotte Were Seen Shopping
J.Lo Shares First IG Photo Post A-Rod Split
Harry Has Experienced "Frostiness" from Royals
Billie Eilish Just Debuted a Bouncy Blonde Blowout
Gigi Shared an Adorable Spring Selfie With Khai
Katie Holmes Posted a 15th Bday Tribute to Suri
Chrissy Teigen Talked Stigma Around Infertility
Beyoncé Stuns in a Mesh Dress With Matching Gloves