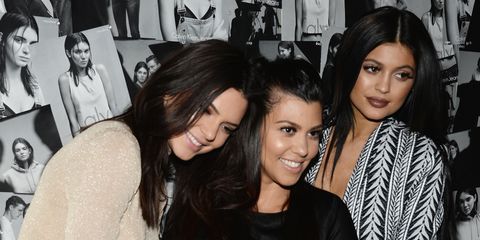 If there's one thing that the Kardashians value above anything else, it's family. And in her latest Instagram, Kourtney revealed that she just hosted a "little dinner party" for Kylie Jenner, Kendall Jenner, and Jordyn Woods. And while there wasn't any food in sight, everyone channeled the '90s hard with their super co-ordinated outfits. Basically, they turned up.

While Kourtney paired her bare midriff with high-waisted, washed out denim, and a long black coat, Kylie opted for a white, pinstripe jacket, and black ripped jeans. Kendall's black polo neck cemented the retro vibe, along with her chunky black boots. And Woods' cream satin shirt needs no introduction:

On her Instagram Story, Kourtney also shared some outtakes from the rest of the night, in which she poured tea at Mr Chow, and compared key stubs with Kendall:

Kylie Jenner has been making more appearances since giving birth to her baby, Stormi Webster, on Feb. 1, 2018. Despite hiding out for the majority of her pregnancy, Kylie has wasted no time in rejoining public life, and has been back to her old social media ways, posting copious amounts of photos on social media. She's also been spotted on several dates with boyfriend, Travis Scott.

The next Kardashian-Jenner sister due to give birth is Khloé, who is nearing her due date in April 2018. Khloé officially revealed that she was pregnant in December 2017, teasing her exact due date when she posted a photo in January along with the caption, "Officially 6 months."

Related Story
Kylie Jenner and Stormi Webster Are Twinning Again
Amy Mackelden Amy Mackelden is a freelance writer, editor, and disability activist.
This content is created and maintained by a third party, and imported onto this page to help users provide their email addresses. You may be able to find more information about this and similar content at piano.io
Advertisement - Continue Reading Below
More From Celebrity
This Is Dax and Kristen's Approach to the Sex Talk
Angelina Jolie Dodged a Question About The Weeknd
Advertisement - Continue Reading Below
Kourtney and Travis Want a "Destination Wedding"
Harry Panicked About the Queen's Hospital Stay
Olivia Munn Doesn't Care About "Settling Down"
These 83 Twitter Accounts Harass Meghan Markle
Adele's Ex Came to a Special Taping of Her Album
Kristen Stewart on a "Spooky" Moment Playing Diana
Travis Covered His Ex' Name With Tattoo for Kourt
Kendall Jenner Wore a Bedazzled Pink Cowboy Hat