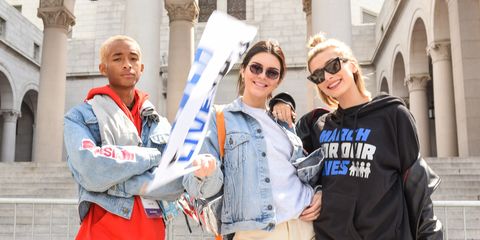 Kendall Jenner let her politics be known this past weekend when she attended the March for Our Lives. Stepping out at the march in Los Angeles, alongside close friends Jaden Smith and Hailey Baldwin, Jenner demonstrated which cause she supports.

Related Story
Kimye Took North to the March For Our Lives

Jenner carried a flag featuring the March for Our Lives logo, while Baldwin wore a sweatshirt with the same design.

But it was the back of Jenner's jacket that grabbed everyone's attention: It showcased an image of POTUS trying to shout something, while a safety pin held his mouth closed, along with the caption "GOD SAVE US… HE AIN’T MY PRESIDENT…":

The striking jacket made a huge statement, and proved that Jenner doesn't approve of the current president or his party's policies. Jenner previously endorsed Hillary Clinton during her presidential run in 2016:

The Keeping Up With the Kardashians star shared several updates from the march on social media, including a video of protestors, along with the caption, "HUGS NOT GUNS ❤️":

As for her stance on gun control, Jenner's participation in March for Our Lives shows that she's changed her mind about owning weapons. On an episode of Keeping Up With the Kardashians which aired in October 2017, Khloé Kardashian explained,

"Kendall and I were talking earlier and she just feels really unsafe. She says she has literally a different stalker outside of her house every few days. She's a single girl who lives alone, like someone's already broken into her home, what if she was there?"

Big sister Kim Kardashian West disapproved of the idea of owning a gun, and it seems as though Kendall has listened to her elders.

Related Story
Inside March for Our Lives as Told by an MSD Alum
Amy Mackelden Amy Mackelden is a freelance writer, editor, and disability activist.
This content is created and maintained by a third party, and imported onto this page to help users provide their email addresses. You may be able to find more information about this and similar content at piano.io
Advertisement - Continue Reading Below
More From Celebrity
Bennifer Recreated Their 2002 PDA Moment
Gabrielle Union Debuted a New, Short Haircut
Advertisement - Continue Reading Below
J.Lo Made Out With Ben on IG for Her 52nd Birthday
Harry Is Putting the Queen in a Difficult Position
Are Will & Kate Sending a Message to Harry & Meg?
Harry and Meghan Reportedly Have a Four-Book Deal
Naomi Osaka Lit the Olympic Cauldron in Tokyo
John Legend Performed "Imagine" for the Olympics
Simone Biles Is Honored With Her Own GOAT Emoji
Kate Winslet Reveals Her Favorite Red Carpet Look