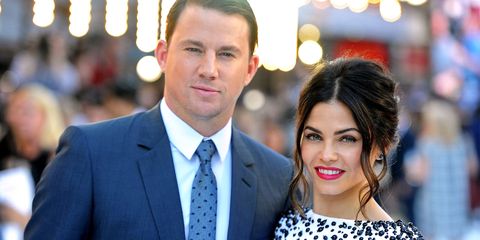 Two days ago, Channing Tatum and Jenna Dewan broke our hearts with a single Instagram post. After nine years of marriage, the Step Up co-stars are calling it quits. The news of their divorce shocked many because Tatum and Dewan didn't exactly show signs that they were having problems—except maybe when Tatum skipped the Oscars after-parties to (supposedly) watch their 4-year-old daughter, Everly. Even then, no one thought anything of it.

Just last week, they were posting hilarious photos of each other with marker makeovers created by their daughter. So is possible that Tatum and Dewan have mastered the art of secret keeping? Yes, maybe.

Body language expert Patti Wood analyzed the couple's final appearance together, along with their social media profiles—and she was just as surprised as the rest of humanity that their divorce came so suddenly.

During their last public appearance together at the premiere of War Dog: A Solider's Best Friend in November 2017, Tatum and Dewan seemed completely fine. Sure, there was a bit of awkwardness when he reached out to grab her hand. Woods says there is some tension in Tatum's face, and Dewan is smiling, but not at him.

Whether it's merely a caught-in-the-moment photo, or our biggest (yet, subtle) hint that their marriage was on the rocks, the duo was all smiles the rest of the evening, leading us to believe they were still very much in love.

However, in the last professional photo we could find of them together—just one month later—it's fairly obvious something is awry. Though paparazzi shots are notorious for capturing couples at bad times, Woods says she didn't even recognize them as a pair here.

"I wouldn't know that they were a couple if you didn't tell me this was a couple photo, because of their distance and the fact that he's walking ahead," she says.

There's almost two feet between them, and Tatum is making no effort to reach back for Dewan, which is a huge red flag. Meanwhile, her facial expression is angry—lips pursed, chin tilted upward, eyes glaring.

"I would say it's that they don't want to be photographed, but she's looking at him and she has paused as if he should be with her," Woods explains.

Still, after this photo nothing immediately changed in their relationship—especially on social media, where they share intimate details about their lives. Dewan hasn't posted a photo on Instagram with Tatum since September 2016—and whether or not that's because of relationship issues, it just became normal to fans to not see him all over her page.

Tatum, on the other hand, has continually posted photos of them together, including the most recent one of their marker makeovers. He's also continued to praise his soon-to-be ex-wife all over social media, posting images of just her.

Woods says there was something about them as a couple that she doesn't see often in celebrity relationships. "What they had was real. I don't always see very real affection and comfort with couples."

According to their statement on Instagram: "Absolutely nothing has changed about how much we love one another." And we're really starting to think this is could be true—of course they still love each other, despite their new life paths. This is probably why we never saw this devastating split coming.