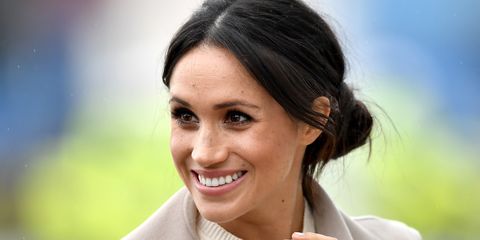 Meghan Markle and Prince Harry were noticeably absent from the Easter Service this past weekend. It even took place in their wedding venue, St. George's Chapel in Windsor Castle. But apparently Markle had a very good reason for skipping the event.

Related Story
What Meghan Markle’s Family Have Said So Far

At the time, Hello! reported that "the lovebirds were most likely enjoying some downtime out of the public eye." And Kensington Palace told Access that Markle and Prince Harry's "weekend plans are private."

But according to royal expert Omid Scobie, who appeared on Good Morning America today, "Meghan left London last Thursday with a rare break in her calendar, to fly to Los Angeles to spend time with her mother, Doria."

Countdown to the Royal Wedding! How Meghan’s been finalizing details for the big day with her mom! @dianermacedo brings us this morning's @GMA Cover Story. pic.twitter.com/1xvSmynM8D

According to Scobie, Markle had some important wedding plans to discuss with her mother, ahead of the big day on May 19. Scobie added that Markle was "equipped with sketches from the wedding and of the wedding dress itself, so she could really give her mom some insight on how the big day will look."

Royal contributor Scobie also revealed on GMA that Markle and Prince Harry will fly Ragland over to London soon to help with the wedding preparation. And while Markle's dress is still top secret, the former actress has apparently been having fittings for the gown at Kensington Palace, and is getting close to finalizing her wedding look.

Several members of the royal family were in attendance at the Easter morning church service that Markle missed, even Kate Middleton, who is currently pregnant with her third child and due to give birth later this month.