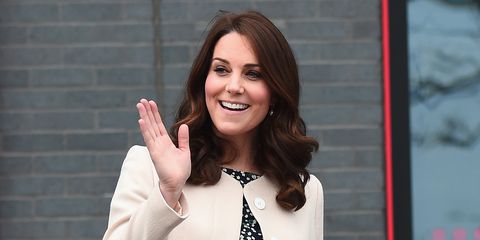 Kate Middleton's due date is fast approaching, and as she prepares to give birth to her third child with Prince William, the Duchess is stocking up on the essentials.

Spotted in a grocery store in Norfolk, England on Monday, Middleton was photographed by another shopper, who was surprised to see the royal picking up her own groceries. After she'd bought everything she needed, Middleton was then seen loading her own bags into the back of her Range Rover, having also grabbed one of the free coffees the supermarket gives away to shoppers.

According to the eyewitness (via Daily Mail), Middleton even bought some sale items, apparently selecting a coriander or parsley plant which visibly had a 25% off sticker on it. Even the Duchess of Cambridge isn't averse to grabbing a bargain when she sees it.

It's widely thought that Middleton is now on maternity leave, following her surprise appearance at the Easter service with Queen Elizabeth II on Sunday. Prince William and his wife were thought to have broken royal protocol by arriving late to the service, even after the Queen herself had gotten there.

According to Hello!, Middleton's due date is around April 23, and The Lindo Wing at St. Mary's Hospital has been prepping for the baby's arrival (via Travel & Leisure). US Weekly even reported that a "luxe maternity suite" has been reserved for the Duchess ahead of her due date, in case she goes into labor sooner than expected.

Amy Mackelden Amy Mackelden is a freelance writer, editor, and disability activist.
This content is created and maintained by a third party, and imported onto this page to help users provide their email addresses. You may be able to find more information about this and similar content at piano.io
Advertisement - Continue Reading Below
More From Celebrity
Sussexes Share New Birthday Photo of Archie
Charles Is Still Upset Over Harry's Oprah Tell-All
Advertisement - Continue Reading Below
Meghan and Harry Share New Archie Photo
The Cambridges Share Their First Full YouTube Vid
Courteney Cox Said the 'Friends' Fountain Was Grim
Meghan Wins Copyright Claim Over Letter to Father
The Royals Wish Archie a Happy Second Birthday
Charles Is Reportedly “Aggrieved” With Harry
Adele Stuns in Rare Birthday Photo Dump
Serena and Olympia Twinned in Swimsuits Again