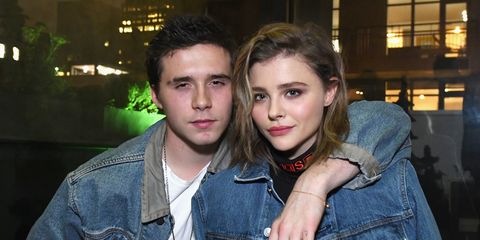 Following on from THAT photo of Brooklyn Beckham very publicly making out with a model, Chloë Grace Moretz seems to have responded to the news that she's no longer dating the photographer.

While Beckham was kissing Wood, Moretz was doing what most of us were this past weekend—listening to Cardi B's Invasion of Privacy. And in a seemingly apt post on her Instagram Stories, Moretz referenced one Cardi B song in particular—"Be Careful."

Already, "Be Careful" is known as an anti-cheating anthem, which features the infamous refrain, "Gave you TLC, you wanna creep and shit/ Poured out my whole heart to a piece of shit." So, the fact that Moretz singled out this song over all others seems pretty poignant, given those photos of Beckham engaging in PDA with someone else.

Moretz and Beckham's relationship has been on-again-off-again since 2014. But the couple seemed to be going strong just over a month ago, when Moretz wished Beckham a happy birthday, by writing on Instagram, "Never Stop Smiling, I Love You, Happy Birthday Brooklyn 🎈♥️":

But over the weekend (via The Sun), Beckham was spotted at the Honorable Society Tattoo Parlor, with Canadian model Lexi Wood. Their very public displays of affection suggested that he's no longer with actress Moretz.

Of course, it's totally possible that Moretz was just listening to Cardi B's new album and didn't mean anything with her Instagram post. But as the pair never announced their breakup, the timing of Moretz's post definitely hints at discord.

Related Story
Victoria Beckham's Sweet Family Instagram Post
Amy Mackelden Amy Mackelden is a freelance writer, editor, and disability activist.
This content is created and maintained by a third party, and imported onto this page to help users provide their email addresses. You may be able to find more information about this and similar content at piano.io
Advertisement - Continue Reading Below
More From Celebrity
Beyoncé Stuns in a Mesh Dress With Matching Gloves
Lizzo and Chris Evans Had the Best IG Interaction
Advertisement - Continue Reading Below
Travis Shared PDA-Heavy Bday Tribute to Kourtney
How the Queen Ends Awkwardly-Long Handshakes
The Queen Has a Rule Against Bad Talking Family
The Queen Took a Pic of Philip With Her to Funeral
The Queen's Tolerance Was the Key to Her Marriage
J.Lo "Likes" Shady IG Post After A-Rod Split 👀
Beyoncé Shares Photos of Her White Power Suit
Will & Kate Welcomed Harry Back Into Their Group