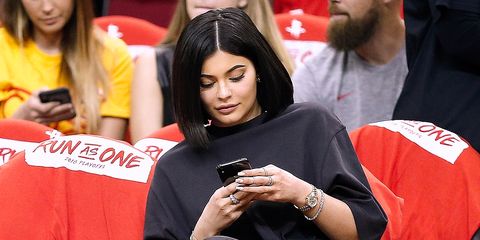 Kylie Jenner is obsessed with her daughter Stormi—and honestly, so are we. The new mom loves to pose for pictures and videos with her two-month-old baby and her latest batch are her most real and down-to-earth yet.

To recap, Kylie has, so far, been known to post perfectly-posed pictures with her little bundle of joy. Like this low-key twinning photo that shows off just how perfect the beauty mogul's blunt bob is:

And this runway-worthy stroll around the block with a baby carriage:

And this selfie that is completely adorable, but also probably one of roughly a thousand almost-identical takes:

Kylie's latest impromptu photo shoot with Stormi, though, feels, well, genuinely impromptu. The pictures and videos, posted to Kylie's Instagram Story, show her and Stormi hanging out in classic mom and daughter loungewear (a white hoodie for Kylie and a simple onesie for Stormi).

In addition to outfits that look like things we normals (and our normal babies) would wear, Kylie and Stormi both showcased their messy hair and Kylie went makeup free, showing off her naturally freckled face.

In one of the videos, which Kylie captioned "my happy baby," she and Stormi laugh together at nothing in particular (how's that for a bond—Stormi has been alive for less than three months and they already seem to have inside jokes).

If this isn't what love looks like, then what even is?

Kylie finished the video on a closeup of Stormi, something we all need more of on our Instagram feeds.