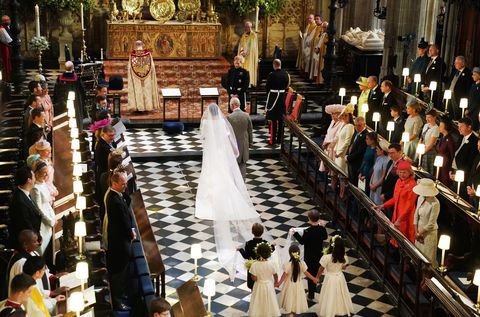 Update 5/19: Elton John did in fact perform during the Queen's luncheon reception for Meghan and Harry. The prince reportedly wants John to sing at the evening reception as well, so he might be singing the newlyweds' first dance song.

Shortly after singing at the daytime reception, John, himself, tweeted about the occasion. "'Love recognises no barriers. It jumps hurdles, leaps fences, penetrates walls to arrive at its destination, full of hope.' - Maya Angelou."

During the ceremony Sheku Kanneh-Mason stole the show with his sensual cello-playing skills.

Original: Prince Harry and Meghan Markle will walk down the aisle on May 19th and the closer we get to the big day, the more details emerge about the ceremony and the reception. Today, it was revealed that Elton John will be performing at the royal wedding this Saturday.

TMZ reports that sources close to the singer said he is set to perform—though we don't know if that will be during the ceremony or the reception. John originally had a show booked in Vegas the same day, but cancelled due to a "scheduling conflict," which is obviously, Meghan and Harry's wedding.

The singer has been very close with the royal family for years—he was friends with Princess Diana and famously performed "Candle in the Wind" as a tribute at her funeral.

Kensington Palace has also shared some other information about the music for their wedding service at St. George's Chapel.

"The music will be under the direction of James Vivian, Director of Music, St George’s Chapel, including the Choir of St George's Chapel, and a selection of choral groups, soloists, and musicians," Kensington Palace wrote on Twitter.

Karen Gibson and The Kingdom Choir are also scheduled to perform. "The Choir is made up of a group of British artists dedicated to creating a sound that demonstrates the community they share, and has been performing both nationally and internationally for over 20 years," Kensington Palace wrote.

In February, Mel B. (better known as Scary Spice) said during an interview on The Real that the Spice Girls would be performing at the royal wedding.

Later, however, Mel C. (aka Sporty Spice) said that her former bandmate's comments were a joke that was taken too seriously.

"Oh yes, there's been quite a lot of press interest there. My invite hasn't turned up yet. It was all that snow. I think the mail's been a bit held up in the snow," she said at the Prince's Trust Awards, according to E! News. "I think [Mel B] was joking. I think the media ran with it a little bit."

Other rumored performers include Ed Sheeran and Sam Smith.

When asked in December if he would be performing at the nuptials, Sheeran said that he hadn't been asked, but that if the royal couple did ask, his response would be, "Yeah, why not?"

Smith took things further, volunteering for the gig during an interview with The Sun. "I'm obsessed. I want to sing at the wedding. Oh my god, I'd love to. It would be a dream," he said.

We will have to wait until May 19 (or until Kensington Palace makes more announcements) to know for sure who will perform at the big event.

[editoriallinks id='46ab3328-547c-4f40-8533-44b30e1cc668'][/editoriallinks]
Kayleigh Roberts Contributor Kayleigh Roberts is the weekend editor at Marie Claire, covering celebrity and entertainment news, from actual royals like Kate Middleton and Meghan Markle to Hollywood royalty, like Katie Holmes and Chrissy Teigen.
This content is created and maintained by a third party, and imported onto this page to help users provide their email addresses. You may be able to find more information about this and similar content at piano.io
Advertisement - Continue Reading Below
More From The Ultimate Guide to the Royal Family
This Old Video of the Queen Saying "Nah" Is LOL
Diana Had a Secret Message on Her Wedding Shoes
Advertisement - Continue Reading Below
Will's Friends Made "Jibes" About Kate's Mom
William Will Suffer "Worst" from Harry's Memoir
Harry's Friends Don't Want to Be in His Memoir
Will & Kate's Modern Approach to Raising George
Why Harry's Memoir Release Date Has Upset People
The Royals Are Worried About Prince Harry's Memoir
Harry Is Putting the Queen in a Difficult Position
Are Will & Kate Sending a Message to Harry & Meg?