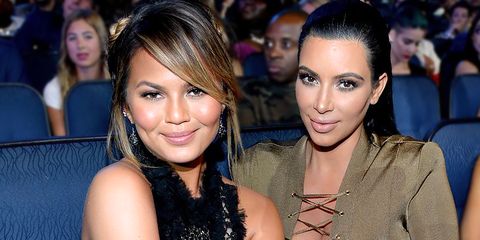 Chrissy Teigen is getting closer and closer to her June due date with baby No. 2, so her friend/fellow celebrity mom decided to throw her a surprise baby shower.

Kim and Chrissy, naturally, documented the shindig on social media, allowing us normals who weren't invited to live vicariously through their Instagram Stories. First, a picture of the hostess and the mom-to-be, just to set the mood:

Because Kim K doesn't do anything that isn't at least a little extra, there were several cakes at the party, all decorated with puns about the newest addition to the "Legend" family (Chrissy's husband, John Legend's, real last name is Stephens, but there just aren't as many Stephens puns out there).

The cakes said things like "A Legend in the Making" and "Legendary," which Chrissy and John's new baby is sure to be.

Chrissy was a huge fan of the cakes. In one video, Kim caught the model munching on a big spoonful of cake and then shared a shot of a half-eaten cake and explained that Chrissy had consumed it all by herself, which, honestly, only makes us love Chrissy more.

At one point, Chrissy decided to take a ride of a giant, decorative sheep in a move that Kim said would leave art collectors (and her mom, Kris Jenner) appalled. Apparently the sheep is a very pricey piece of art, but hey, after Kris broke Chrissy's coffee table at the model's Super Bowl party, we'll call this even.

And, it wouldn't be a true Teigen party without John Legend playing piano (and who is that lurking in the background? Yeah, it's Kanye West).

On Thursday, John and Kanye made headlines after Kanye tweeted screenshots of several texts John had sent him about his pro-Trump tweets. The exchange was passionate, but civil and West even tweeted a selfie with John from the baby shower to prove there was no ill-will.

"We got love. Agree to disagree," he captioned the photo.

Kayleigh Roberts Contributor Kayleigh Roberts is the weekend editor at Marie Claire, covering celebrity and entertainment news, from actual royals like Kate Middleton and Meghan Markle to Hollywood royalty, like Katie Holmes and Chrissy Teigen.
This content is created and maintained by a third party, and imported onto this page to help users provide their email addresses. You may be able to find more information about this and similar content at piano.io
Advertisement - Continue Reading Below
More From Celebrity
Rihanna Takes Out the Trash on Trump's Last Day
Chrissy Teigen Shared a Moving Post About Sobriety
Advertisement - Continue Reading Below
Meghan's Royal Aides to Testify in Her Court Case
Greta Thunberg Hilariously Trolled Trump—Again
Watch Demi Perform During Biden's Inauguration
Joe Biden Follows Chrissy Teigen on Twitter
J.Lo Wore Head-to-Toe Chanel for the Inauguration
The Queen Sent a Private Message to Joe Biden
Lady Gaga's PDA with Boyfriend Michael Polansky
Twitter Reacts to Lady Gaga at the Inauguration