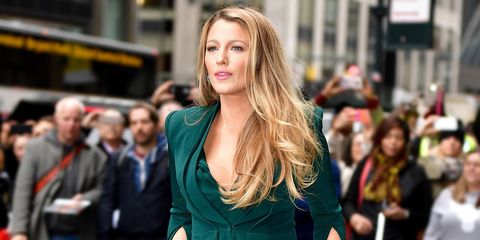 Last night, Blake Lively made a dramatic move on Instagram: Like Taylor Swift before her, Blake purged her feed of, well, everything.

She also unfollowed everyone, including husband (and frequent Insta-comments jokester) Ryan Reynolds. Well, almost everyone—Blake now follows just 28 people, all of whom are named Emily Nelson.

Well, it all relates to the game of Hangman the actress was playing on social media yesterday.

Blake posted multiple Instas (which, of course, have now been deleted) until commenters finally filled in the blanks to solve the game. The answer: "What happened to Emily?"

A quick trip to Blake's IMDB page explains the game of Hangman and her Instagram purge: The actress is appearing in A Simple Favor alongside Anna Kendrick, out this September. According the IMDB, the movie "centers around Stephanie (Anna Kendrick), a mommy vlogger who seeks to uncover the truth behind her best friend Emily's (Blake Lively) sudden disappearance from their small town."

It all started with.... #ASimpleFavor

So, mystery solved: In the same way Taylor Swift cleared out her Instagram to signal that "the old Taylor is dead" before the release of "Reputation," Blake Lively deleted all traces of her social past as a marketing stunt. Effective! Dramatic! But...what will happen to all those great outfit shots?