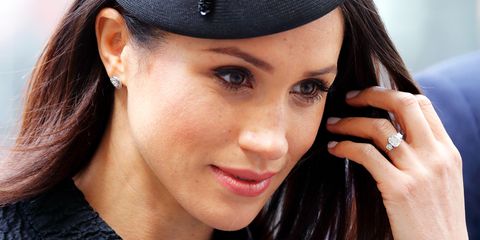 Update, 5/19: Prince Harry kept with tradition and selected a simple, Welsh gold ring, crafted from a piece of gold gifted by the Queen, herself. According to royal correspondent Rebecca English, Cleave and Company have made both rings.

Harry will wear a ring, too—something he is not required to do. His ring will be platinum, with a textured finish, according to English.

Original: It's officially royal wedding month! Prince Harry and Meghan Markle are set to wed on May 19, and we've all been wondering: How will the bride-to-be will wear her hair? What kind of jewelry will Meghan accessorize her dress with? Who will be her maid of honor? For the most part, Meghan does actually have a hand in a lot of the decision-making—though she might not have any say in what her wedding ring will look like.

"The Royal family has a tradition that has continued for nearly 90 years since the Queen Mother Elizabeth Bowes-Lyon married George VI and her wedding band was made of Welsh Clogau gold," Castigliano says.

So, not copying—just following a decades long tradition that started in 1923. Despite having completely different engagement rings, the Queen, Princess Margaret, Princess Anne, Princess Diana, and the Duchess of Cambridge all have very similar bands made from the same nugget of gold extracted from Clogau St. David's mine at Bontddu in North Wales.

When it comes to jewelry, Meghan loves anything yellow-gold—undoubtedly a reason Harry chose it as the band for her engagement ring which he custom designed with a diamond from Botswana and two smaller stones from his late mother, Princess Diana's collection.

"It's incredible," Markle said in their first sit-down interview with the BBC. "Everything about Harry’s thoughtfulness, and the inclusion of [Princess Diana’s stones], and obviously not being able to meet his mom—it’s so important to me to know that she’s a part of this with us."

She continued: "It’s incredibly special to be able to have this [ring], which sort of links where you come from and Botswana, which is important to us. It's perfect."

And it's a good thing she loves gold because Castigliano says it's likely Harry will follow suit to honor the female royals. "I am sure Harry will want to continue the tradition and Meghan’s band will be plain gold with the Welsh dragon stamp," she says.

But it's possible he'll tweak tradition slightly and choose a lighter shade of gold to match her engagement ring. When Prince William and Kate Middleton got married in 2011, William presented her with an 18-karat band made from Welsh-gold given to him by the Queen—and surely, Her Majesty will do the same for Harry.

As for his wedding band, there's no age-old wedding ring tradition that carries on in the line of male royals. In fact, Harry doesn't have to wear a ring at all if he doesn't want to. Despite Kate's stunning sapphire ring and gold band, William's hand has been left completely bare since their wedding—but it was a choice.

“It was something the couple discussed, but Prince William isn’t one for jewelry—he doesn’t even wear a signet ring—and decided he didn’t want to,” a palace aide said prior to their wedding, according to the Daily Mail. “It really is just down to personal preference.”

Will Meghan want Harry to wear a ring to keep with American tradition? It seems we'll be waiting until they're at the alter exchanging ring(s) to find out.

Related Stories
Megan Markle Wore These Wedding Jewels
Meghan Markle Is Wearing a Bun to Get Married
Alex Warner
This content is created and maintained by a third party, and imported onto this page to help users provide their email addresses. You may be able to find more information about this and similar content at piano.io
Advertisement - Continue Reading Below
More From Celebrity
Prince Philip Will Not Have a State Funeral
Harry Doesn't Want Drama at Philip's Funeral
Advertisement - Continue Reading Below
How Meghan Feels About Missing Philip's Funeral
Eva Longoria Loves Her Mini Trampoline
The Royals Won't Wear Uniform at Philip's Funeral
Jennifer Lopez and Alex Rodriguez Announce Breakup
Charles Teared Up As He Read Tributes to Philip
The Gucci Family Is Upset About 'House of Gucci'
Taylor Sent the Sweetest Gift to a Frontline Nurse
Royal Family Shares Rare Photo of Prince Philip