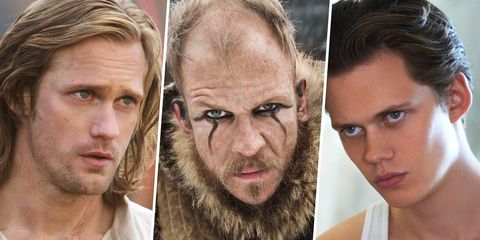 For reasons best chalked up to "being super virile," Swedish actor Stellan Skarsgård has approximately one million children (actual number of offspring: eight; still, that's more than the Von Trapps!). And four of them—Alexander, Gustaf, Bill, and Valter—happen to be actors. So in the interest of investigative journalism, we went ahead and ranked their movies on a scale of notness to hotness.

10. Alexander Skarsgård: The Legend of Tarzan

Look, no shade to Alexander as Tarzan, but I just cannot support this "Meg Ryan in You've Got Mail"-era haircut.

And, to be frank, the role of Hot Tarzan has already been taken by this fine animated fella:

9. Bill Skarsgård: Arn: The Kingdom at the End of the Road

Do I have any idea what this movie is? No. Have I seen it? Absolutely not. But is Bill Skarsgård relatively dreamy in it? YES. And does he have a '90s hair-flop that would make Shawn from Boy Meets World jealous? Also yes.

That said, Bill in this nun-like chain-mail can most certainly not get it.

Hello, please consider Alexander Skarsgård's flat-ironed hair in The East. The fact that something so objectively unfortunate could manage to be sexy HAS to be one of the eight wonders of the world!

Valter, the youngest of the Skarsgård thespians, isn't famous here in the United States (yet), but that doesn't mean he isn't worthy of this list! VALTER MATTERS, you guys! And maybe I only shoved him here out of pity, but it's FINE! Frankly, the headband realness he's serving in the background of this photo is hotter than anything Tarzan could deliver.

The video for "Paparazzi" is not a film, I know. But I am including it on this very important list due to Alexander Skarsgård's extensive make out scene with Lady Gaga, whom he later shoves off a balcony.

Gustaf Skarsgård is better known for his smoldering TV work, including a brand new role in Westworld and his portrayal of Floki on Vikings. But the second Skarsgard brother has also been in several hilarious-looking movies, including something called The Wizard's Daughter. Not sure what it's about (my guess is the daughter of a wizard) and frankly I refuse to look further into it especially since I discovered stills from this movie seem not to exist. So, in fact, we cannot know how HOTT Gustaf is in The Wizard's Daughter. BUT let it be known that Gustaf Skarsgård as Floki has fabulous eye makeup:

I know all of you are probably trying to recreate this look on your significant other, so fear not! I am currently harassing MarieClaire.com beauty editor Chloe Metzger about what products to use.

Also, because Gustaf only appears on this list once, I'd like to give a special shout out to his tiny beard ponytail, bless its heart!

Bill had a small but important part in Anna Karenina starring Keira Knightly. And by "important" I mean good looking. However, I am disturbed to report that the only decent photo I could find of Bill in this film features him partially blurry in the background.

Insulting, so I fixed it.

This is a Norwegian drama about a love affair and honestly the plot is irrelevant because all that matters is the following.

Exhibit B: Bill Skarsgård's ability to make a cardigan sexy.

Exhibit C: This teeny tiny baby waistcoat that's clinging together for dear life as Bill Skarsgård's muscles threaten to BURST IT AT THE SEAMS.

A world where people refuse to acknowledge that Meekus from Zoolander is hot is not a world I'm prepared to live in. He presumably cannot, like his male-model roommate Derek, help it that he's really, really ridiculously good-looking. Look at his pixilated-yet-lovable face!

I SAID LOOK AT IT!

Look, I know what you're thinking: How is It, a movie about a menacing bald clown with shark teeth, ranking number one. But there is just something weirdly attractive about Pennywise. I don't know if it's his alluring half smile:

Or how he dances when the beat drops:

But Bill Skarsgard in It can get...IT. (BAHAHAHAHA).

This content is imported from {embed-name}. You may be able to find the same content in another format, or you may be able to find more information, at their web site.
Related Stories
Best Chris Movies Ranked by Overwhelming Hotness
The Best Ryan Movies Ranked by Hotness
Mehera Bonner Contributor Mehera Bonner is a news writer who focuses on celebrities and royals.
This content is created and maintained by a third party, and imported onto this page to help users provide their email addresses. You may be able to find more information about this and similar content at piano.io
Advertisement - Continue Reading Below
More From Celebrity
What Happens on Katie's Season?
Jennifer Lopez Wears Old Bracelet From Ben Affleck
Advertisement - Continue Reading Below
Simone Biles Cheers on MyKayla Skinner
See the Royals Socialize at a 1991 Cocktail Party
Eugenie's Pics from Inside Harry and Meghan's Home
Queen Trolled Tourists Who Didn't Recognize Her
Blake and Ryan Recreated Their First Date on IG
Charles Expertly Ignored Boris Johnson's Snafu
How Kitty Spencer's Wedding Dress Honored Diana
Dolly Parton On the #FreeBritney Movement