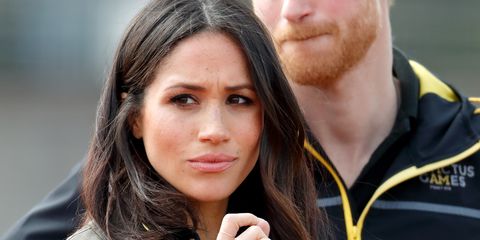 Prince Harry and Meghan Markle will walk down the aisle on May 19th in Windsor, England. Just days before, on May 13th, Lifetime will air its take on their love story, Harry & Meghan: A Royal Romance.

If you think that he royal family is above paying attention to things like Lifetime movies, however, you would be wrong. Apparently, Buckingham Palace is very aware that the movie is happening and they're not thrilled about it.

Queen Elizabeth's press office has been keeping up with the TV movie's trailers and they're worried about one scene in particular—a love scene that shows Harry and Meghan in bed together, Vanity Fair reports.

"What I’ve heard is that they’re seriously worried about the sex scene," director Menhaj Huda said. He even revealed his palace source, just to prove his intel is legit: "My wife’s best friend has been dating the press secretary of the palace." Now, let's just hope the palace press secretary doesn't get fired for leaking reactions to people who would leak them to people who would leak them to the press.

The movie's creative team doesn't seem too concerned by the palace's qualms anyway. "Let them worry," producer Merideth Finn joked during a panel discussion in Beverly Hills with the movie's stars, Parisa Fitz-Henley (who plays Meghan) and Murray Fraser (who plays Harry). "People have sex."

The movie includes a lot of real moments from the couple's lives, along with imagined behind-the-scenes reactions. Scenes in the film include the couple’s trip to Botswana, their now-famous proposal, Meghan meeting Kate Middleton, Harry lobbying for Meghan to be allowed to keep her lifestyle blog, The Tig (he obviously loses that fight), and even a scene in which Harry confronts Princess Michael of Kent about the offensive brooch she wore when she met Meghan.

"We would literally be writing a draft and [co-screenwriter Scarlett Lacey] would e-mail me with a news item, wondering, 'Should we put this in?'" screenwriter Terrence Coli said. "In a couple of cases, we incorporated on the fly."

The brooch incident, for example, was reportedly added at the last minute.

Harry & Meghan: A Royal Romance airs on Lifetime May 13.

Kayleigh Roberts Contributor Kayleigh Roberts is the weekend editor at Marie Claire, covering celebrity and entertainment news, from actual royals like Kate Middleton and Meghan Markle to Hollywood royalty, like Katie Holmes and Chrissy Teigen.
This content is created and maintained by a third party, and imported onto this page to help users provide their email addresses. You may be able to find more information about this and similar content at piano.io
Advertisement - Continue Reading Below
More From The Ultimate Guide to the Royal Family
Prince Charles Is Leaving London When Harry Visits
Why Will & Kate Wouldn't Hang Out With Harry
Advertisement - Continue Reading Below
The Queen Has a Collection of Dog Toys for Sale
Meghan Revealed the Nod to Diana in 'The Bench'
Will Spent Father's Day with George and Charlotte
Charles Won't Allow Archie to Become a Prince
Prince Charles Cant Deal with Harry's Criticisms
Meghan and Diana Had Similar Issues with the Queen
The Queen Insisted on Cutting a Cake with a Sword
Harry Texted Kate, Not Will, When Lili Was Born