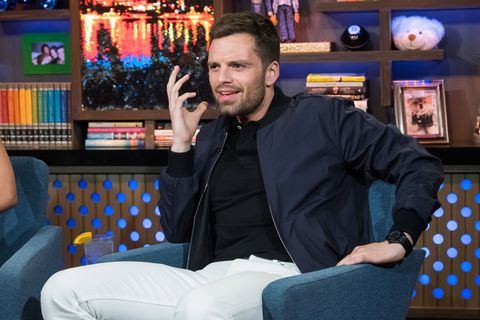 Remember the era of Hiddleswift? How could any of us forget, right? The world traveling, the infamous "I Heart T.S." shirt. Obviously, those closest to Tom Hiddleston were also aware of their friend's famous relationship—and they weren't all psyched about it.

In a new interview on Watch What Happens Live with Andy Cohen, Hiddleston's Avengers costar, Sebastian Stan, admitted that he was worried for his pal during the whole Taylor Swift thing.

"It was one of awe and extreme concern," Stan said when a caller asked about his reaction to seeing Hiddleston in "I Heart T.S." shirt. "Obsession and yet at the same time, I don’t know, I was really worried—mainly for him. Love is quick and hard."

Stan's comments seem to confirm what Hiddleston has maintained in the press—that, for him at least, the relationship was real and not a publicity stunt.

In March 2017, Hiddleston told GQ that the relationship was, in fact, real.

"Taylor is an amazing woman. She’s generous and kind and lovely, and we had the best time," he said, before hinting that the media attention surrounding their relationship might have led to its demise. "A relationship in the limelight… A relationship always takes work. And it’s not just the limelight. It’s everything else."

Swift, for her part, hasn't had much to say publicly about the whirlwind romance, but many fans believe that her song "Getaway Car" is about the relationship. In it, lyrics like "I wanted to leave him / I needed a reason," hint that the short-lived courtship might not have been as meaningful to her as it was to Hiddleston.