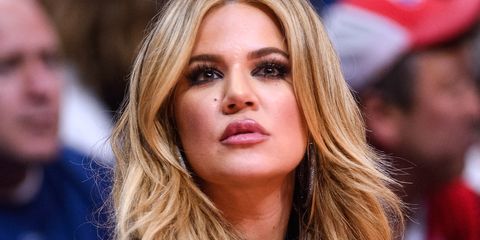 Khloé Kardashian and Tristan Thompson appear to be working things out. Saturday night, the reality star and new mom was spotted at the Quicken Loans Arena in Cleveland supporting Thompson and the Cavaliers at their game against the Toronto Raptors, TMZ reports.

She was spotted wearing a leopard print jacket and large sunglasses on the sidelines, where she was escorted by security.

The basketball game comes just one day after Khloé and Tristan were spotted out having lunch with friends at TownHall restaurant in Cleveland.

The outings come as a surprise for some fans after news of Tristan's alleged infidelity broke just days before Khloé gave birth to the couple's daughter, True Thompson. While neither Khloé nor Tristan has publicly addressed the cheating scandal, their public appearances together seem to indicate that they're trying to work things out.

Some members of the Kardashian-Jenner family might not be thrilled by Khloé's decision to work on the relationship. Kim Kardashian, in particular, has been incredibly vocal about the cheating scandal. During a recent interview with Ellen DeGeneres, the reality star was brutally honest when asked for her take on the situation.

Sources close to Khloé, have insisted that she's open to working things out with Tristan and her recent actions seem to suggest that she's trying to do just that.

Kayleigh Roberts Contributor Kayleigh Roberts is the weekend editor at Marie Claire, covering celebrity and entertainment news, from actual royals like Kate Middleton and Meghan Markle to Hollywood royalty, like Katie Holmes and Chrissy Teigen.
This content is created and maintained by a third party, and imported onto this page to help users provide their email addresses. You may be able to find more information about this and similar content at piano.io
Advertisement - Continue Reading Below
More From Celebrity
Will & Kate Welcomed Harry Back Into Their Group
Queen Left a Handwritten Note on Philip's Coffin
Advertisement - Continue Reading Below
The Queen Said Grief Is the Price We Pay for Love
All of the Photos from Prince Philip's Funeral
The Queen Wore This Brooch to Philip's Funeral
Kate Middleton's Nod to Diana at Philip's Funeral
Queen Elizabeth Appears at Prince Philip's Funeral
Harry Back With Will & Kate at Philip's Funeral
How Prince Harry and Meghan Honored Philip Today
40 Celeb Exes Who Worked Together After a Breakup