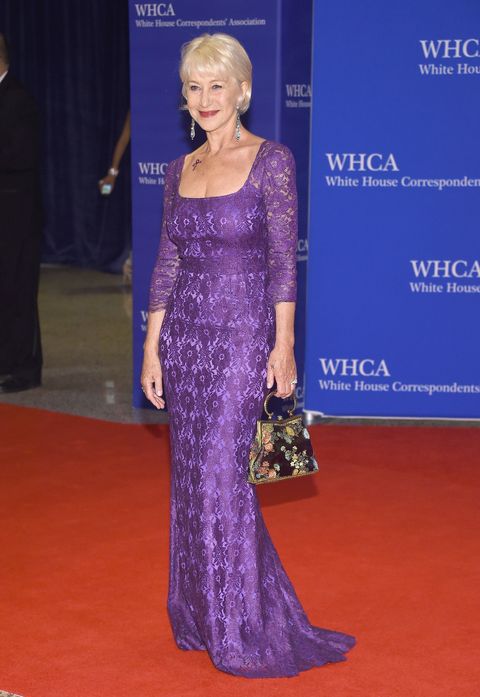 Now that President Obama's final White House Correspondents' Dinner has come and gone, it would be easy to say he won the night (with some help from Kendall Jenner). But actually that honor goes to Helen Mirren and her awesome, very purple tribute to Prince.

Complementing her elegant amethyst lace gown,the actress showed off a tiny purple "Love Symbol" right below her collar bone. The symbol was synonymous with Prince, who died suddenly in April at age 57.

Mirren told the Washington Post that the symbol was self-drawn saying, "I'd love to say Prince himself did it in 1988 or something, instead of me in the bathroom this morning."

And if that's not enough to convince you of how great she is, President Obama confirmed it in his speech: "Helen Mirren is here tonight," he said. "I don't even have a joke here, I just think Helen Mirren is awesome. She's awesome."

This content is created and maintained by a third party, and imported onto this page to help users provide their email addresses. You may be able to find more information about this and similar content at piano.io
Advertisement - Continue Reading Below
More From Celebrity
See the Royals Socialize at a 1991 Cocktail Party
Eugenie's Pics from Inside Harry and Meghan's Home
Advertisement - Continue Reading Below
Queen Trolled Tourists Who Didn't Recognize Her
Blake and Ryan Recreated Their First Date on IG
Charles Expertly Ignored Boris Johnson's Snafu
How Kitty Spencer's Wedding Dress Honored Diana
Dolly Parton On the #FreeBritney Movement
Will & Kate Are Nervous About George's Future
George Won't Be Forced to Go to Boarding School
Diana Would Have Written a Memoir Too, Friend Says