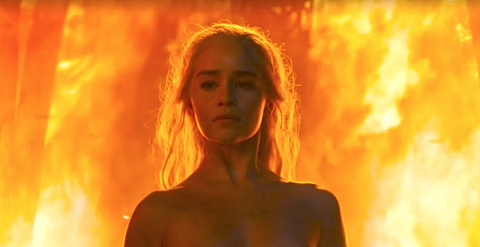 Warning: This post contains spoilers for Sunday night's episode of Game of Thrones.

On Sunday night's episode of Game of Thrones, Daenerys Targaryen takes over as the ultimate Khaleesi when she kills all the Dothraki leaders at once, emerging from the flames like a god. The moment was amazing, and actress Emilia Clarke made it clear that the nude scene was all her, in control of her environment.

One person who was cheering her on from the sidelines was Jason Momoa, who played her (dearly departed) Dothraki husband, Khal Drogo, on the show. The two have stayed friends and have fun shouting each other out on social media.

On Instagram, Momoa posted a screenshot of the epic scene:

And his caption is a delight:

This isn't the first time Momoa has recently shouted out his TV wife. In previous episodes this season, he cheered on Daenerys as she stood up to the Dothraki:

In both of his captions, he said "see you soon" and "see you in Ireland," which is where Game of Thrones is filmed. Could it be that Khal Drogo is returning to Westeros, or is Momoa just trolling us? Considering that he might be busy portraying Aquaman in upcoming Marvel movies, it might just be wishful thinking. Or he could just be stopping by for the season wrap party. Stop playing with our emotions, Khal Drogo!