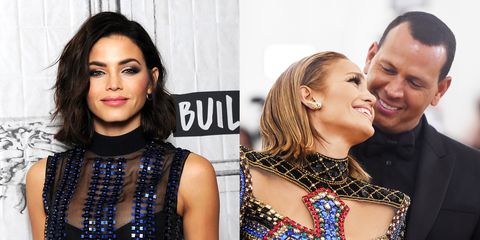 Jennifer Lopez and Alex Rodriguez have been dating for more than a year now, and Jenna Dewan believes a proposal is coming very soon (yay!). Dewan and Lopez work together on World of Dance, and when Dewan was asked if she thought Rodriguez would pop the question, she seemed pretty confident he was planning something.

"I mean, I'm sure that's happening" she told Entertainment Tonight. The other judges on the show agreed that J.Lo and A-Rod seem ready to be engaged.

"If you've ever seen the two of them together, it's pretty much the next step. They're, like, annoyingly cute," Ne-Yo said. "Like, stop touching each other."

Lopez recently dropped one big hint that she wants Rodriguez to propose: Her new song "El Anillo," which literally translates to "The Ring." In a behind-the-scenes interview from the set of the music video—which gave us major Game of Thrones vibes—she told ET, "It's more about the value of it. It's kind of like, 'If you want me in your life you have to give me the respect and place in your life that I deserve.'"

She added, "And I think a ring sometimes is a symbol of that but it's more of a symbolic thing." Hopefully, Rodriguez is picking up what Lopez is putting down, and we'll have another royal wedding to look forward to, soon! 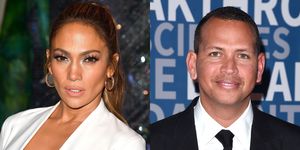 Jennifer Lopez and Alex Rodriguez Are Dating
Alex Warner
This content is created and maintained by a third party, and imported onto this page to help users provide their email addresses. You may be able to find more information about this and similar content at piano.io
Advertisement - Continue Reading Below
More From Celebrity
How the Queen Ends Awkwardly-Long Handshakes
The Queen Has a Rule Against Bad Talking Family
Advertisement - Continue Reading Below
The Queen Took a Pic of Philip With Her to Funeral
The Queen's Tolerance Was the Key to Her Marriage
J.Lo "Likes" Shady IG Post After A-Rod Split 👀
Beyoncé Shares Photos of Her White Power Suit
Will & Kate Welcomed Harry Back Into Their Group
Queen Left a Handwritten Note on Philip's Coffin
The Queen Said Grief Is the Price We Pay for Love
All of the Photos from Prince Philip's Funeral