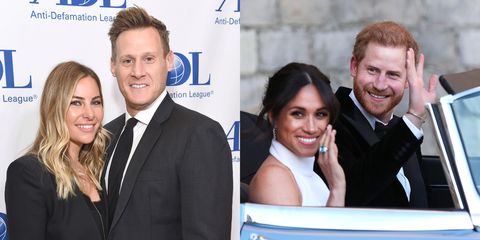 The couple commemorated the news on Instagram, with a sweet photo of them smiling that, of course, shows off Kurkland's left hand and the diamond engagement ring Engelson gave her. He reportedly captioned it the photo, "Luckiest guy I know! Get ready to party!" His account is private, however, so most the world can't give their good news an official Insta like.

Engelson and Kurkland have reportedly been dating for three years, with news of their relationship first reported in November 2017, around the time Meghan and Prince Harry announced their engagement.

Engelson looks truly happy with Kurkland and reportedly took his split from Meghan very hard. He and the now-duchess were married for two years, from 2011 until 2013, but had been dating for much longer—since 2004.

"The split with Meghan hit Trevor pretty hard. He went through a rough time during the breakup and that was only made worse when Meghan got together with Harry last year,” a source told The Sun after news of the royal engagement broke. "He had to re-live it all again—this time in public. It wasn’t the most amicable of divorces and there were hurt feelings on both sides. Now he has bounced back and things are looking great for him. He has a new woman in his life and his career is going from strength to strength."

A source told Woman's Day in 2017 that Meghan and Engelson's relationship suffered from a classic Hollywood problem: distance. "Trevor and Meghan's marriage broke down when she moved to Toronto, where Suits is filmed, and it was the long distance that tore them apart," the source said.

Kayleigh Roberts Contributor Kayleigh Roberts is the weekend editor at Marie Claire, covering celebrity and entertainment news, from actual royals like Kate Middleton and Meghan Markle to Hollywood royalty, like Katie Holmes and Chrissy Teigen.
This content is created and maintained by a third party, and imported onto this page to help users provide their email addresses. You may be able to find more information about this and similar content at piano.io
Advertisement - Continue Reading Below
More From Celebrity
The Palace Just Shared Prince Louis Birthday Pic
Meghan and Harry Talked Every Day During UK Trip
Advertisement - Continue Reading Below
J.Lo Wishes A-Rod's Daughter a Happy Birthday
Irina Shayk Shared a Rare Photo of Her Daughter
John Travolta Talked Dancing With Princess Diana
Meghan Markle and Archie Speak to the Queen
Who Is Alexandria Ocasio-Cortez's Partner?
Did Charles, Harry, and William Mend Relationship?
The Kardashians' Most Body-Confident Nude Shoots
Chrissy Teigen + Meghan Markle Spoke About Loss