It's been a month since Anwar Hadid, hot younger brother of Bella and Gigi Hadid, was last spotted with his girlfriend, Nicola Peltz. The Daily Mail reported that they were "still going strong" while posing together at the Prada Resort Collection show in May. Over their year and a half relationship, they frequently went on date nights, hung out at Coachella, packed on the PDA, and Peltz even gushed about how much she loves Hadid's family.

However, TMZ recently spotted Kendall Jenner making out with Hadid at last night's CFDA Awards after-party in NYC. (Kendall also alluded to her attraction to Hadid back in 2016.)

Whether or not this means Hadid and Peltz are over, her successful acting career is sure to keep her in the spotlight. Here, everything you need to know about the 23-year-old actress.

She's successful in TV and film.

At 15 years old, Peltz starred as Katara in the 2010 fantasy adventure film, The Last Airbender. She also worked on A&E's horror drama Bates Motel for three seasons and played a teenage daughter in the fourth Transformers film, Transformers: Age of Extinction. (No, Shia LaBeouf was not in this one.)

She made a cameo in Miley Cyrus' "7 Things" music video.

She also made a cameo in the music video for Zayn Malik's 2016 song, "It's You." FYI, Zayn was dating Anwar's oldest sister Gigi at the time. My brother's girlfriend is going to star in my boyfriend's music video, too!

According to Peltz's Instagram, she's represented by IMG. She also did an interview and cover shoot for "ASOS Meets" where you can find out more fun facts about her like her favorite red carpet pose. (Speaking of red carpets, she went to the Vanity Fair Oscar's after-party with Hadid in March.)

She's been linked to Justin Bieber.

The pair went on multiple dates together (photographic evidence here). A source told E! back in 2016, "Justin has a crush on Nicola and really enjoyed the date with her the other night. He wants to settle down and have a relationship. He feels like something steady would be good for him." They also apparently had lots of sleepovers.

The friends recently attended Alexander Wang's fashion show together in February. They were also spotted way back in 2016 having lunch and shopping. They clearly have fun bowling together, too.

She and Anwar were friends before they started dating.

When the couple went public in January 2017 a source told E!, "They are dating. It's a fairly new relationship, but they are really good friends and part of the same group of friends." Unfortunately, Peltz and Hadid reportedly no longer follow each other on Instagram. 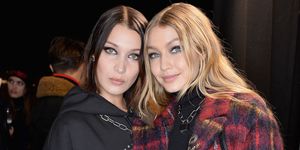 The Hadid Siblings Took Over Gigi's Show
Rachel Epstein Associate Digital Editor Rachel Epstein is the associate editor at MarieClaire.com, where she covers celeb and royals news, culture, lifestyle, and politics.
Advertisement - Continue Reading Below
More From Celebrity
How Goop's Vagina Candle Came to Be
Kim and Kourtney Throw Punches in New 'KUWTK' Clip
Advertisement - Continue Reading Below
Selena Spent Weekend Helping Solve a Murder Case
JFK and Jackie Kennedy's First Year of Marriage
Kate and William Dress Up for Dear Evan Hansen
Kobe Gave His Vanessa a Dress From 'The Notebook'
Will There Be a 'Bachelor' Spin-Off for Seniors?
Beyoncé and J.Lo's Nail Art Tribute to Kobe
Demi Lovato's Gorgeous No Makeup Selfie
Kate Middleton’s Brother Is Making a Documentary